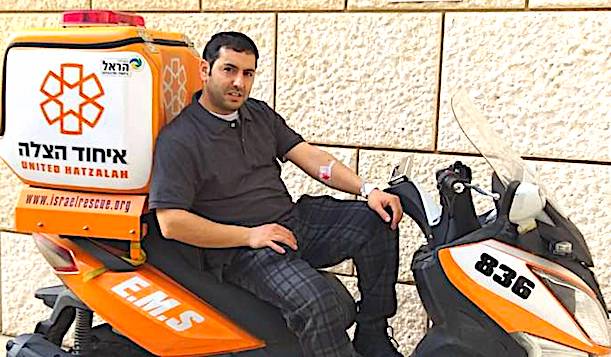 An EMT in Israel apparently donated his bone marrow to an Arab boy in the U.S. with a rare immune disorder, which saved the boy’s life and also proved that Jews must be very genetically closely related to Arabs, which completely contradicts the claim that today’s Jews are true Israelites and therefore “God’s chosen people”:

My name is Yisrael Otmazgin. I am a Jewish Israeli, and this is the story of how I saved the life of a Muslim American boy that I never met.

A year has passed since I made a bone marrow donation. I underwent surgery, fully sedated, in order to donate bone marrow to a boy whom I didn’t know — and according to international law, it is forbidden to reveal the identities of the donor or the recipient of the donation.

A few days ago, I received a phone call from the coordinator of bone marrow donations at Hadassah Ein Kerem hospital. “Shalom Yisrael,” the coordinator began. “The family of the recipient child of your bone marrow wants to contact you, and I know that you have expressed interest in being in contact as well, so please sign a confidentiality waiver and I’ll connect you.”

Twenty-four hours after I signed the waiver, I received a form with contact details and preferred method of contact for the family of the recipient. I learned that the recipient was a young boy in the United States located in the state of Michigan.

I wanted to immediately contact them, but how could I? I didn’t know whether the boy’s life had been saved. If the boy died, then contacting them would deepen their trauma.

I decided to send a very carefully-worded message. I identified myself as “the donor,” and I wrote that I was very much hoping to save the life of the child who was the recipient.

A few minutes passed and I received a reply. “Hi, This is ******. Israel, thank you so much for saving my son. I cannot thank you enough. I am really excited to meet you too.”

“My son was born with a rare and debilitating physical ailment called SCID. This disease prevents the body from properly developing an immune system. This means that even the tiniest and most insignificant bacteria or viruses can kill our child. Children like him are kept inside of a ‘vault’ in the hospital to make sure that they do not contract any illness. Their normal life expectancy is less than a year if a bone marrow donor cannot be found. His two older brothers were only a 50% match. But you, from all the people in the bone marrow database, were a 100% match.” (There are close to 44 million people in the database.)

The patient’s mother continued: “Following the transplant, his body responded well to the treatment and there was an immediate improvement in his medical condition. Since then, he has contracted three separate illnesses that are common for young children and his body overcame the illnesses each time. This means that the transplant succeeded. This means that he is also partly your child. He is alive because of you and we have no way to say thank you.”

…I am an Israeli and I live in Israel, yet I saved the life of this young Arab boy in the United States. I am incredibly happy about being able to do so, and I sincerely hope that my story will serve as a guide for the sanctity of life to people all over the world.

How is it possible that this Israeli Jew is a far better genetic match than the Arab boy’s own brothers?

All Arabs are racially mixed with many different races and tribes — Arab, White, Black, Nabatean — — pretty much an amalgamation of all the different tribes mentioned in the Bible.

But each Arab will have a different admixture of all those different racial groups, often making it difficult to find genetic matches for organ donations.

Of course, Israeli Jews claim that they are “God’s chosen people,” or the Israelites of the Bible — specifically, the tribes of Judah and Levi.

According to Israelite law, race mixing is strictly forbidden, and the offspring of marriages between Israelites and non-Israelites are considered racial “bastards” who are forbidden to “enter the congregation of God” forever. (Deuteronomy 23:2)

Once an Israelite is mixed, his or her descendants can never be considered true Israelites ever again.

It would be scientifically impossible for a true racial Israelite to be a close genetic match with any Arab — and if such a match exists, then this Israeli — and all Israelis — must also be race-mixed Arabs.

True Israelites are commanded by God to be a holy and separate people, which means they would have rare recessive genes compared to the dominate genetic dark traits of the surrounding Arab populations.

So if today’s Jew are not true Israelites, who are they?