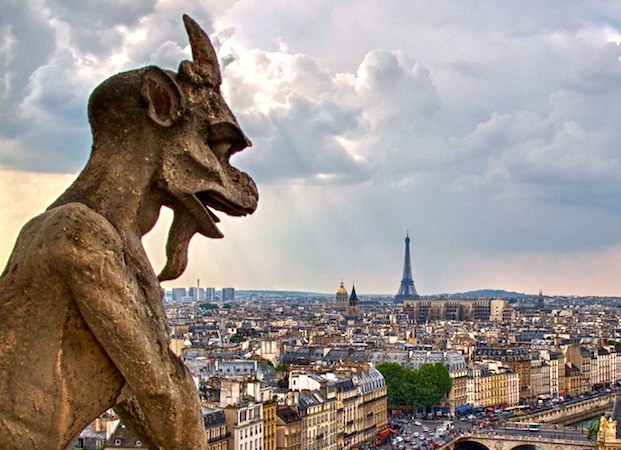 Addressing the wave of bombings in Sri Lanka that killed nearly 300 people, Avri Gilad claimed on his Channel 13 morning show, “HaOlam HaBoker,” on Monday: “We see Muslim pressure on Christians around the world, [including] a wave of church fires in France.”

He was interrupted by reporter Emmanuelle Elbaz-Phelps, a dual Israeli-French citizen, who noted French investigators have found no evidence of foul play in last week’s blaze that ravaged Notre Dame.

French police believe the fire was likely started by an electrical short circuit at the site, which had been undergoing restoration.

“The French. All the Europeans are liars,” he continued.”They deny cases of rape. You cannot publicize anything. Anything that can be interpreted as a hate crime is swept under the rug.”

“That is unequivocally untrue,” replied Elbaz-Phelps. “Right now there is an investigation into Notre Dame that says there is no reason to think it’s terror-related.”

“I don’t believe a single word they say,” said Gilad. “They’re scared of their own shadow and are even more afraid of Muslims.”

Conspiracy theories following the fire, which gutted the 12th century cathedral and elicited an outpouring of support from across the world, had alleged that the fire was the work of Islamists and tied to Holy Week ahead of Easter.

Gilad’s comments were widely criticized on social media, including by fellow Channel 13 journalists.

“Much respect to the awesome Emmanuelle Elbaz-Phelps who was not silent in the face of the lies and conspiracy theories spread on the morning show of Reshet TV and who put things right,” tweeted the network’s Barak Ravid.

Every attack against churches in France over the last year has been carried out by Muslims except Notre Dame, or so we are told.  Of course, Notre Dame was equipped with a state-of-the-art security system which had to have either been disabled or circumvented in order for the incendiary devices to be placed and detonated, which automatically precludes the idea that this was the work of amateur disgruntled Muslims.  Why wasn’t any of the video from security cameras investigated prior to making a definitive conclusion about the cause of the fire?

As Gilad says, all of it smacks of a poorly executed cover-up, but the question arises: if Muslims actually did it, why didn’t any groups claim responsibility?  The jewish-controlled media surely has a motivation to convince the public that it wasn’t a Muslim hate crime, but they also have a motivation to also blame Muslims, like Gilad has done, so as to deflect any investigation that might implicate the Mossad.  After all, French intelligence sources have admitted that Paris is literally a “playground” for the Mossad’s international activity.  Either way, don’t expect any “smoking gun” evidence to prove who was ultimately responsible.