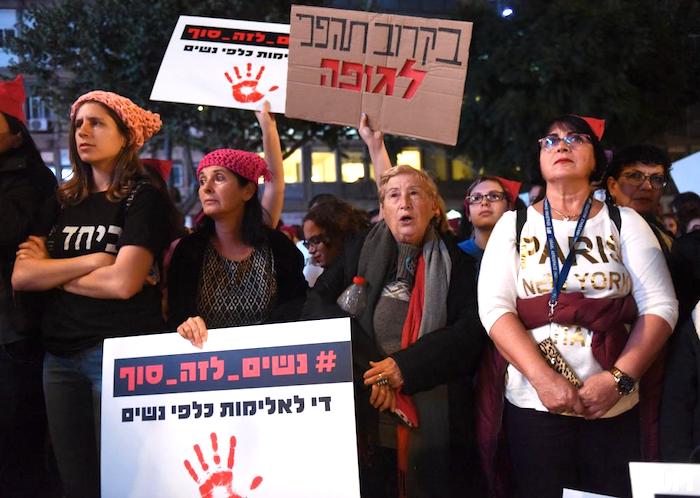 In 2018, after 24 Israeli women were murdered by their male domestic partners — far more than were killed in terror attacks by Palestinians — [former] Prime Minister Netanyahu weighed in on the crisis, calling these jewish men “terrorists”:

Prime Minister Benjamin Netanyahu said….that he considers violence against women a form of terrorism and vowed to allocate funds to fight it, a day after widespread protests against government inaction on the matter. A new committee on the matter resolved to promote a law forcing abusers to wear tracking bracelets to ensure they don’t violate restraining orders.

Some 30,000 demonstrators gathered in Tel Aviv’s Rabin Square on Tuesday evening to protest what they say is authorities’ failure to stem a sharp increase in domestic violence.

The protest was the culmination of a day of action that saw thousands of women go on strike and participate in rallies across the country. Intersections throughout Israel were blocked Tuesday morning as women went on strike to protest the deaths of 24 women killed since the start of the year by a partner, family member, or someone known to them.

At the start of a discussion at a new ministerial Knesset committee dedicated to combating domestic violence, Netanyahu said, “I view violence against women as terrorism, unequivocally.

“You don’t combat terrorism just by taking care of the victim,” he said. “Terror victims must be taken care of, but nobody would dare think we would combat terrorism without dealing with the terrorists.”

He said that current mechanisms for punishing abusive men were “paralyzed,” and added that data on the subject was “very, very problematic.”

“I understand that there are more allocations than I thought, but they are not being used. When an allocation isn’t used, it’s as if it doesn’t exist,” said Netanyahu, who chairs the committee, and vowed to allocate money as needed.

“We need to help abused women on the one hand, and on the other hand punch these abusive men or abusive husbands in the face,” he added. “Both have to come together.”

Jewish women created the Feminist Movement by convincing all women that all men were abusive and oppressive when, in fact, it was really Jewish men who were the real problem, not White Christian men.

Jewish men are notoriously misogynistic but at the same time notoriously hen-pecked and feminine themselves — a strange mental and emotional make up that some mental health “experts” might be tempted to label “conflicted.”

Jewish women, on the other hand, have a well-deserved reputation for being notoriously masculine, opinionated, and combative.

Put these types of unstable personalities together in a relationship, and there will be casualties.

Of course, the founders of Israel have bragged that Jews invented State terrorism as a weapon to achieve political goals, so it would only make sense that these natural-born terrorists would bring this “winning” strategy into their personal relationships.

It’s a difficult mental tightrope to walk for Jews — to be perpetual “victims” at the hands of the “goyim,” but on the other hand, be the ultimate victimizers against anyone who dares oppose them and their agenda.

The conflicted Jewish psyche requires them to see hypocrisy as a virtue.