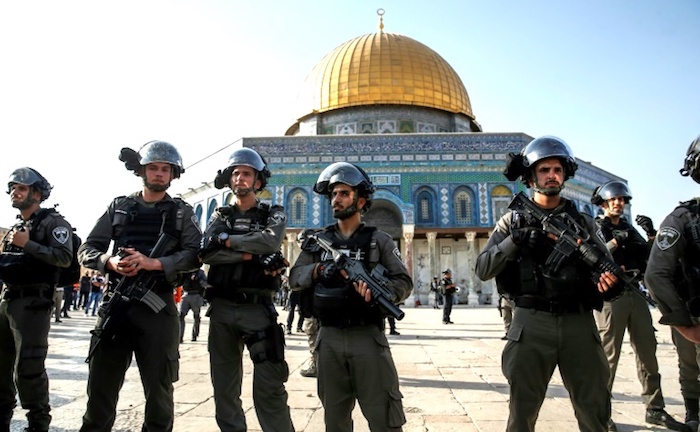 Israeli settlers in Jerusalem have increased their attacks against the mosque on the Dome of the Rock, including a recent incendiary balloon, to put the Muslims on notice that the Israelis fully intend to rebuild their temple on The Mount:

The frequency of Israeli attacks and incursions into Al-Aqsa Mosque and the Dome of the Rock is increasing in an attempt to create facts on the ground that embody the Israeli dream of building the so-called Temple.

By emptying Al-Aqsa Mosque from its worshipers and staff, the Israeli occupation authorities seek to create a suitable atmosphere for settlers to practice their rituals and hideous plans against the Mosque.

In a dangerous precedent, over the past week, Al-Aqsa guards detected a burning object approaching the shrine and the Dome of the Rock, fired from the Al-Buraq Wall, where extremist settlers have an increasingly strong presence.

Al-Aqsa guards told the PIC that the fire balloon was launched from Al-Buraq Wall towards the Dome of the Rock.

This is the first incident of its kind in which fire balloons were flown to target sanctuaries in Occupied Jerusalem. In other new incidents, drones were recently spotted taking photos of the Dome of the Rock and Al-Aqsa Mosque.

However, it is not the first time that Al-Aqsa Mosque was the target of an arson attack by Israeli settlers.

On August 21, 1969, an Australian fanatic Jew, Denis Michael Rohan, entered Al-Aqsa Mosque from Al-Guanameh Gate and set fire to it.

At the time, the fire broke out in the eastern wing of the chapel on the southern side of Al-Aqsa Mosque. The fire reached the façades of the Mosque, its ceiling, carpets, rare decorations and the furniture and copies of holy Quran.

The fire also engulfed the historic pulpit of the Mosque, which was brought by Salah al-Din from the city of Aleppo, when Muslims restored the city of Jerusalem in 1187. The pulpit had been a beautiful landmark, as Sultan Nur al-Din Zanki ordered preparing it to be sent to Al-Aqsa after the liberation of the Mosque.

…[The Director of Al-Aqsa Mosque, Omar al-Kiswani] noted that “The fierce onslaught against the city of Jerusalem has increased since the announcement of the US administration of its plan to transfer its embassy from Tel Aviv to Jerusalem, recognizing Jerusalem as the capital of Israel.”

He added that “the occupation authorities carry out an integrated plan to impose sovereignty over Al-Aqsa Mosque by force,” pointing out that it expels worshipers and arrests employees during the storming of Al-Aqsa by extremist settlers.”

The Israeli occupation authorities have recently banished more than 12 staff members of Al-Aqsa Mosque guards and staff for a period ranging from one to eight months.

The Jerusalem Center for Israeli and Palestinian Studies said that Israeli settlers intensified their incursions into Al-Aqsa during the month of August (2018), with some 2,841 settlers entering its backyards, including Israeli intelligence, military personnel and students of the alleged temple.

According to a report, 2,247 settlers stormed Al-Aqsa in August, including 337 Israeli special forces and 67 Israeli intelligence agents, while 190 students from the so-called Students of the Temple group stormed Al-Aqsa courtyards.

In mid-August, Israeli occupation forces stormed Al-Aqsa courtyards and arrested six female worshipers from its yards. They later released them on condition that they are banned from the Mosque for varying periods.

The occupation authorities continue to deprive dozens of Jerusalemites from entering Al-Aqsa Mosque, putting them on a black list and imposing a security ban on their entry to the Old City and Al-Aqsa.

Make no mistake — the Israelis are “all in” on rebuilding the Temple Mount, and we are now witnessing, if we have the eyes to see,  merely the opening skirmishes of what eventually will be an open conflict, which will probably include some kind of staged bombing of the Al-Aqsa Mosque by the IDF/Mossad, which will be blamed on Muslim extremists, just like 9-11.  The Palestinians are correct to point out that moving the U.S. Embassy to Jerusalem was a tacit “greenlight” for the Israelis to become more aggressive toward taking The Mount.

Evangelical Christians in America and Europe are pouring millions of dollars into jewish organizations that support the “re-building” of the “third” Temple because they naively believe that when the Temple is built, Christ will return and rapture these “elect” Christians up into “heaven”.  And the Jews are more than willing to play along with this ludicrous, non-Scriptural scenario because it supports their agenda of hegemonic conquest of what they consider to be Greater Israel.  This is why Jews have often referred to their gentile enablers as “useful idiots”.