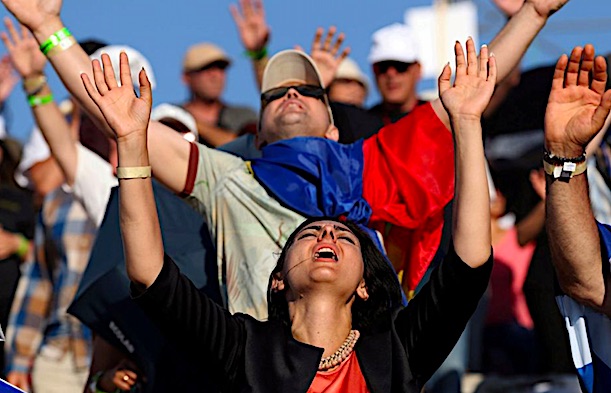 Israel has presented senior officials of the Trump administration a proposal to develop up to twenty-four major Biblical tourism sites in illegal West Bank settlements in Judea and Samaria:

The sites will feature a focus on Evangelical Christian tourism, Likud MK and former Jerusalem mayor Nir Barkat is the plan’s architect, reports Times Of Israel.

The project is being called: “Developing Win-Win Economy in Judea and Samaria”. The idea was originally presented by Barkat to President Trump’s senior adviser (and son-in-law) Jared Kushner during the summer. The presentation reportedly came at the direct request of Israeli Prime Minister Netanyahu.

The plan also involves annexing parts of Area C in Judea and Samaria to Israel.

Barakat told the Times of Israel that he was inspired by the archaeological park in Shiloh. The site was the original home of the Tabernacle before the Temple was built and is also where Hannah said her prayer. Tel-Shiloh boasts 60,000 Evangelical Christian tourists per year. In the same interview, Barakat noted that “There are 800 million Evangelicals in the world”.

Barakat added that the plan was originally presented to Kushner prior to the Bahrain Conference on Israeli-Arab economic cooperation back in June.

There are nowhere near “800 million” evangelical Christians in the world — and the only ones that count, as far as the Israelis are concerned, are the ones in America who blindly pour tens of millions of dollars into Israel every year, and their numbers are relatively small, and getting smaller, perhaps no more than 20 million at this point.

Regardless of their real numbers, the Israelis promote this “biblical tourism” as yet another way to get White Americans to finance the ersatz State of “Israel”, including their illegal annexations of the Golan Heights and now the West Bank, which is the next major move that will occur in the second term of the Trump presidency.

What has held up this annexation is Netanyahu’s inability to form a government, along with the perennial corruption charges which have plagued him throughout his career as an Israeli gangster/politician.

Netanyahu has a history of bragging about how easily Americans can be manipulated into supporting Israel’s ever-expanding gangster empire, and how the Jews will ‘suck’ America dry as vampires are wont to do:

“If we get caught they will just replace us with persons of the same cloth. So it does not matter what you do, America is a golden calf and we will suck it dry, chop it up, and sell it off piece by piece until there is nothing left but the world’s biggest welfare state that we will create and control. Why? Because it is the will of God and America is big enough to take the hit so we can do it again and again and again. This is what we do to countries that we hate. We destroy them very slowly and make them suffer for refusing to be our slaves.”
—Bibi Netanyahu, 1990 recorded conversation at Finks Bar in Jerusalem, with an Israeli spy working in America