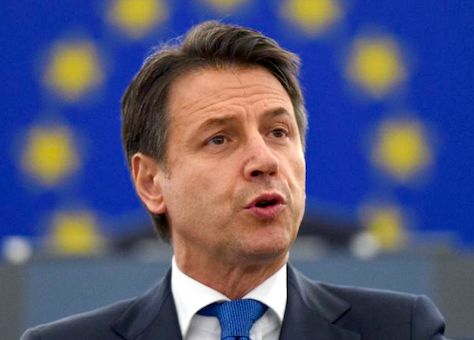 “Antisemitism in the past as well as today, is a suicide for the European man,” Conte said speaking at the Great Synagogue of Rome, where he was welcomed by the President of the Jewish Community Ruth Dureghello, and the Chief Rabbi Riccardo Di Segni.

“When a European man despises or rejects the Jewish people, they despise and reject themselves and deny an essential part of their identity,” he added.

The prime minister delivered a speech in front of an audience of several hundred Jewish students and young professionals from the Former Soviet Union, who are on a trip to the Italian capital accompanied by the Italian born Chief Rabbi of Russia Berel Lazar.

The trip is part of the project Yachad, that every year sends a delegation of young Jews from the former Soviet Union to visit European cities and then Auschwitz.

“We have to be on the alert against the resurgence of forms of implicit or explicit antisemitism”, Conte also said. “The collective loss of reason that we experienced in the last century has not been chased away forever. Unfortunately, we must acknowledge that in many European countries including Italy, including in this very city, episodes of reprehensible violence still occur.”

White Europeans and Jews have been in conflict with each other for as long as they have occupied the same space together — which goes back well over 1,600 years.

The white Christian nations resented being told by this tiny yet powerful minority how they should accommodate Jewish ways.

If antisemtism were truly “suicide” for Europeans, they would have died out a long time ago.

If anything is true, had it not been for their natural self-preserving “antisemtism,” the white Christian nations of Europe would have collapsed long ago.

In fact, it is antisemitism that has protected Christendom from the judaizing efforts of these outsiders — and if our European ancestors had not resisted the Jewish onslaught, they would have become Muslims and Jews hundreds of years ago

There is no “judeo-Christian” tradition in Europe — no common ground especially in our faith and race which account for most of our identity.

The Italian Prime Minister is clearly a Judas Goat — the enemy within our ranks — trying to convince White Europe to let its guard down and trust the Jews to defend our Christian culture and race.

And if we are foolish enough to do that, we will be committing collective suicide indeed.