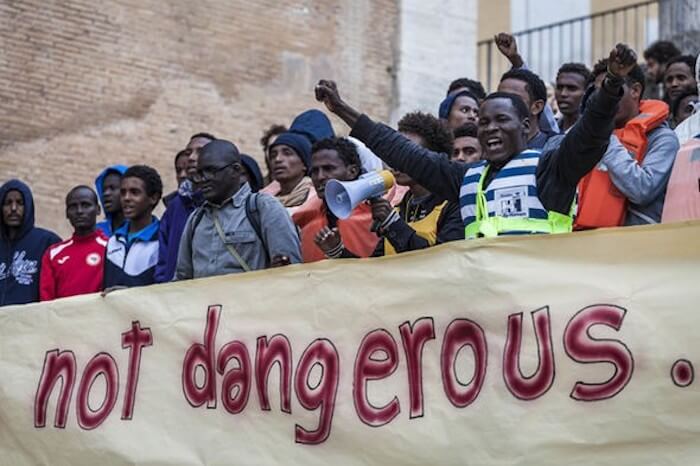 Rational Italians who are resisting the Third World invasion of their country are now being smeared by the jewish media:

Italy has seen a steady rise in increasingly severe racist violence. “There have been 33 assaults of a racist nature in the past two months,” Associate researcher at the University Paris 1 and noted historian Ludmila Acone told FRANCE 24.

“They have resulted in an impression that this behaviour is now tolerated. Previously these racist attacks caused outrage, but now they are just part of everyday life.”

However, racist events did recently hit the headlines after Italian athlete Daisy Osakue, who was born to Nigerian parents, was training for the European Championships when a motorist threw an egg at her in the northern city of Turin on July 30.

The assault resulted in the discus-thrower nearly losing her eye. The athlete was hospitalised with a corneal injury, and her participation in the championships in Berlin is now in question.

“I do not want to use the race or sexism card, but in my opinion they were looking for a black person,” she said.

However, in the wake of the Osakue scandal, Interior Minister Salvini argues that there has been no increase in racist acts in Italy.

…”Racism has exacerbated since Salvini came to power, but it has also been developed for a long time. Racist remarks are the norm in Italian football stadiums,” Professor of contemporary history at Paris 8 University and Italian citizen Marie-Anne Bonucci told FRANCE 24.

Researcher Acone says racism has been rampant in Italy for years and believes that in addition to the increase in racist language, there has also been a trivialisation of fascism dating back to the first government of ex-prime minister Silvio Berlusconi in 1994.

It has now reached the stage where even the rhetoric of infamous World War II Italian fascist Benito Mussolini is being used by Salvini.

Italy is on the frontline defending the rest of Europe against millions of potential invaders from Africa, and the jewish press continually creates sensational stories about how evil the Italians are when they fight back against the invaders. Italians are expected to welcome with open arms any and all African invaders, and if any resist, they will be compared to Mussolini – and the Nazis, of course.

Every day, Italians witness and read about horrific crimes committed by these Africans, and so it is only natural that they would feel hostility toward Africans walking the streets as if they owned the place. But it’s a “crime against humanity” if the Italians want to remind these invaders that they aren’t exactly welcome.

If this “hate” isn’t stopped soon, the sensible Italians could be soon rounding up Africans and putting them on boats back to Africa.