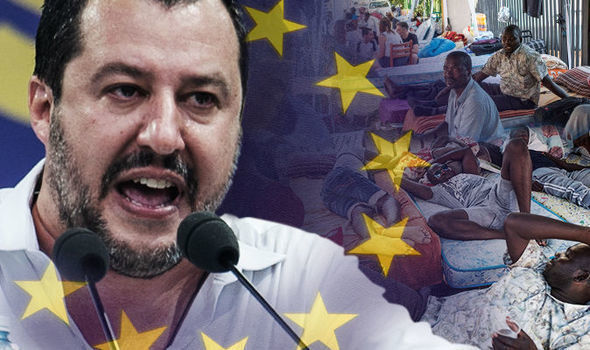 Because of the bureaucratic red tape created by existing EU laws, Italy’s deputy Prime Minister Matteo Salvini complained that it could take up to 80 years to deport the already existing illegal migrants in his country:

He told Italian radio station RTL: “The way things are today we’ll need 80 years to expel them all.”

The deputy Prime Minister has declared plans to deport majority of migrants trying to enter Italy – with or without the EU’s help – insisting Rome “only has room for migrants fleeing war”.

Speaking to the BBC, he said: “Brussels has been promising us help and assistance for years and has been doing nothing.”

Mr Salvini has a long-standing stance against immigration, and continues to lash out against migrants arriving in Italy.

This year, a total of 4,269 illegal immigrants were either flown or shipped back to their countries of origin while another 11,411 were expelled but remain are unaccounted for.

Italy’s coalition government has not established repatriation deals with many countries, making it difficult to ship immigrants back to their countries of origin.

Up to 80 migrants a week are flown back from Italy to Tunisia, as the North African state remains one of the few countries on a successful repatriation deal with Rome.

Tunisia brought in the highest number of migrants to Rome this year, after more than 4,000 arrived by boat to the island of Lampedusa.

The EU has implemented regulations to prevent the influx of migrants to Italy’s borders, employing a Libyan coastguard to stop ships from sailing towards Libyan’s borders.

Of course, the EU laws and procedures on deportations were intentionally written in such a way as to make it virtually impossible to deport anyone in a timely fashion — because the puppetmasters who control the EU want those illegal non-Whites to stay in Europe and create as much mayhem as possible.  If Italy is going to rid themselves of this plague, they are going to have to ignore the EU dictums — and take matters into their own hands.

Once a country enters the EU as a member, it virtually gives up its independent ability to control its own borders — and that was an essentially part of the EU — a borderless Super State in anticipation for the eventual flooding of Europe with Third World invaders.  And any EU member that insists that it still has defensible borders will be economically blackmailed until they comply.