Japhethites, Shemites and the White Slave Trade in Medieval Europe 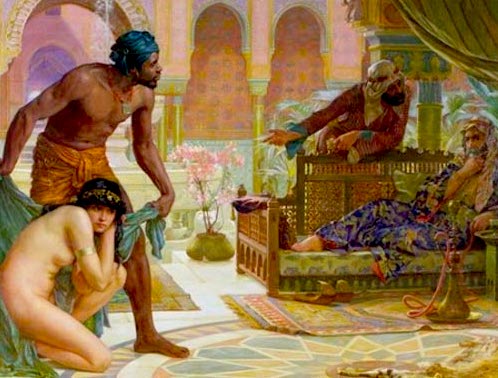 Not only was the trade in White slaves a major part of the economy of Medieval Europe, a slave’s value could even depend on from which son of Noah they descended, Japheth or Shem:

Slaves played an important role in the economy of medieval Europe. They were employed in large numbers, for example in church estates. Almost anyone could become a slave, both pagans and Christians, according to historian Dr. Piotr Pranke.

Shackled and doing the worst jobs? Mistreated by their masters, hurt and humiliated? As a rule, slaves in medieval Europe were not treated this way. As a workforce, they were very valuable and widely used, also in church estates, says Dr. Piotr Pranke, a historian who researches economic relations in the early medieval period.

There were two main types of slavery in medieval Europe. A slave could be a captured person – a prisoner spared during the war. “In this case, even a Christian could become a slave” – says Pranke. “The real reservoir of slaves in medieval Europe were pagan lands, for example Polabian region, Prussia or Pomerania” – the historian explains.

The second category were people enslaved by force, for example during an invasion or captured by pirates. A slave could also be a person born of a slave, convicted of a crime or unable to pay a court fine.

What was the difference between the status of a non-free person and, for example, a simple villager? According to Dr. Pranke, slaves did not have personal freedom and were a form of property. They had to perform the work ordered by the owners and could not marry without their consent. On the other hand, pagans brought deep into western Europe from the area of Polabie were forced to give up their rituals, including burning the body after death.

According to the historian, the fate of pagan slaves was worse than the fate of Christian slaves. They were the objects of long distance trade – they were sold outside Europe, to the Arabian Caliphate. “Christian slaves had to remain in the area of the Western Empire (9th-11th c.). Exporting them beyond its borders was forbidden, although the amount of information about the introduced prohibitions and legal regulations may suggest a different practice” – he adds. Accepting Christianity regulated the legal situation of the slaves.

Asked about the scale of slavery in medieval Europe, the historian said that the demand for slaves was large, also from an economic point of view….

Slaves were also owned by church institutions. They were the property of monastic centres. The law stipulated that their work for the Church should be lighter than in secular estates. In addition, some slaves received an income, for example, part of yields, and were required to pay tithes….

A large part of the slaves went to the Caliphate (Muslim state), due to the fact that – especially in the early Middle Ages – it was dynamically developing economically. The Caliphate stretched from the Iberian Peninsula through the north-western edges of Africa to Persia (today`s Iran). “The demand for slaves in the Arabic world was huge” – Pranke points out.

The Arabs imported huge numbers of Slavic slaves, who served in the palace administration and the guard protecting the Caliph, the ruler of the Muslim state. “Boys and girls were in particular demand. Most of them were children that could be trained for the Caliph`s service” – Dr. Pranke reminded.

The guard in the form of Slavic slaves appeared by the Caliphs from the beginning of the 10th century. The Arab ruler of Cordoba (today`s Iberian Peninsula), Abd ar Rahman III (921-961) initially had 3750 guards, and at the end of his reign – almost 14 thousand! “This means an average annual increase in the number of Slavic guards at a level of around 350 people, nearly one slave per day!” – the historian says.

The Arabs were so willing to import the Slavs, because they were considered the descendants of Japheth (the youngest son of Noah) and their market value was lower than, for example, the value of Persians or Byzantines (descendants of Shem – the elder of Noah`s sons). Their choice – also considering the availability of Slavs in the exchange markets – was therefore pragmatic, the historian believes….

In Baghdad during the early Middle Ages there were about 2,000 merchants claiming to be Christians, whose main source of income was the mediation of trade in valuable textiles, furs, luxury military items and slaves. Those were the highest end commodities, because people were also considered to be a commodity – the scientist says.

In medieval Europe there was no single term for a slave, because their status varied significantly. Meanwhile, an image inspired by antiquity has become established in the popular culture. It is difficult to change that now, Pranke believes.

The term “slave” comes from “Slav”, not from “negro” or “African” as our current history books would like us to believe.  Historically, the number of slaves of Black African descent was small compared to the White slave trade, which can be traced from ancient Sumeria, Egypt, Persia, Assyria, Babylon, Greece, Rome, and then Medieval Europe.

In fact, the demand for White slaves from arabs in North Africa continued up through the 1600s in Europe.

And yet Blacks have been given a virtual monopoly on the slave identity racket, which, ironically has helped “enslave” Whites in ahistorical political correctness.

And it’s worth noting that even the Arab slave traders understood that the White Europeans had their origins in the Middle East as real descendants of Noah, the Genesis 10 Nations.  The Arabs understood this a thousand years ago, yet White Europeans today not only don’t understand it, they’ve probably never heard of the connection, and if they ever did hear it, they’d probably scoff at such an idea.

After all, we are all told that the Jews and Arabs are “semites”, but here we have proof that Arabs themselves knew for a fact that White Europeans were true descendants of Shem.

Ironically, it was the Jews and Arabs who were the primary dealers in the White Shemite slave trade.