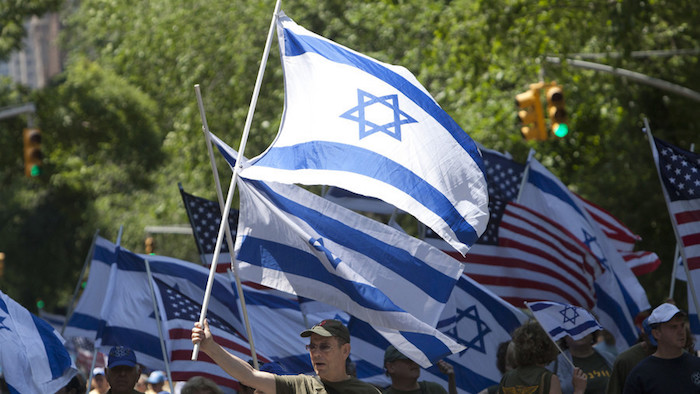 A fake pro-Israel protest manufactured by US-based lobbying groups has been exposed in an exclusive clip from a censored Al Jazeera documentary on Israel’s influence in the US.

The release of the much-anticipated US version of undercover documentary The Lobby has been stalled since the UK version, which aired in 2017, revealed Israel’s influence within the Labour party and its role in drumming up accusations of anti-Semitism…

The Grayzone Project’s Max Blumenthal released a new segment Tuesday, revealing that US think tanks arranged a fake protest to disrupt a Students for Palestine national conference in 2016. The practice is known as astroturfing and aims to create an illusion of dissent where there is none, in turn creating press coverage to further the agenda of the perpetrators.

The footage features Noah Pollak, executive director of the Emergency Committee on Israel, along with fellows from the Hoover Institution. A fellow named Marshall reveals Pollak’s views on students who support Palestine, recounting how he told them, “Look, there are these jihadis who basically support suicide bombing, and they’re on a campus and you have to stop them.”

“This is astroturfing,” he said, and admitted his boss told him attendance was “mandatory.” Marshall also revealed how much he is paid as a fellow when he joked about what people would say if he was exposed.

The video shows the protesters being briefed to stay on message and emphasize that the student group is a “hate group.” The staged protest includes Pollak shouting a number of claims about Palestinians, including, “they kill women, they kill children.”

The footage includes a clip of Pollak explaining that the US is more pro-Israel than the UK, which, he says, “let half of f*cking Pakistan in.”

The Lobby reveals US groups work in tandem with elements of Israel’s military intelligence and Israel advocates like casino billionaire Sheldon Adelson, the Grayzone Project reports.

College liberals naturally have great sympathy for the plight of the Palestinians as the Israelis steal their land and ethnically cleanse the population. To undermine this support, pro-Israel groups in America have unlimited financial support to carry out “dirty tricks” operations–in conjunction with both the Mossad/CIA–in an attempt to discredit any pro-Palestinian sentiment both in the media and on college campuses.

But even with this expose of their lies and treachery, the support for Israel will not waver–because the jewish-owned mainstream media will ensure that Israel is always cast in the most flattering light.

And virtually every member of the U.S. Congress is beholden to the Israel Lobby, AIPAC.