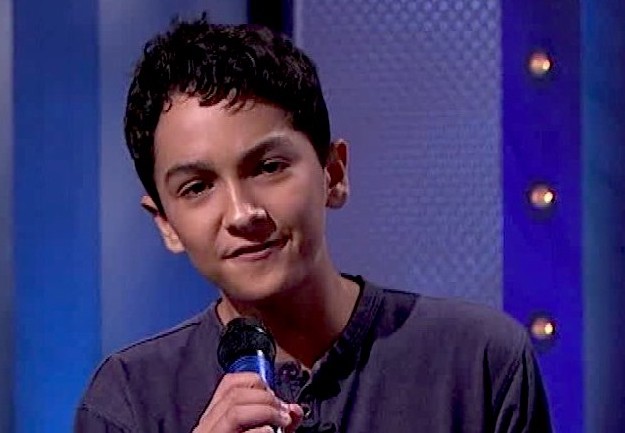 A 14-year old jewish boy in Atlanta, Royce Mann, pretending to be White, won a poetry slam contest apologizing to non-Whites  for his “white” privilege:

A young boy takes the stage. In a shaky voice, he says, “My name is Royce. My poem is titled, ‘White Boy Privilege.'”

The video of the 14-year-old student’s slam poem at his school has gone viral in the midst of heated national discussions regarding race and privilege.

Performed at a slam poetry competition in May at The Paideia School in Atlanta, Royce Mann’s winning poem offers a reflection on the privilege he feels he has been automatically awarded as a result of his being white and male.

As Royce continues, he acknowledges the barriers that those of other genders, races and classes must confront that he is fortunate enough to avoid: “Because of my race, I can eat at a fancy restaurant without the wait staff expecting me to steal the silverware. Thanks to my parents’ salary I go to a school that brings my dreams closer instead of pushing them away.”

Royce concedes that, if given the choice, he would not choose to trade places with anyone else because “to be privileged is awesome.”

As he reads his poem, his voice grows louder and more impassioned. “It is embarrassing that we still live in a world in which we judge another person’s character by the size of their paycheck, the color of their skin, or the type of chromosomes they have.”

…But Royce has also faced backlash, to which he said, “There are definitely people who do deny that white privilege and male privilege exist.”

He said he wanted “to reach the people who are ready to have an open dialogue about this. … If they say, I disagree with you and here’s why, I would be more than willing to discuss it with them.”

Royce’s mother said she didn’t help him with his poem at all. “It was totally his thing. I thought he might get some mixed reaction … but never wanted to discourage him from doing it.”

When a White women insists she is Black, the media mocks her.  When a White man pretends to be Black, the media mocks him.  But when Jews pretend to be White every single day, no one in the jewish-controlled media peeps a words of protest.  And it’s not because Jews actually believe they are White; rather, it’s because by pretending to be White, they can make it appear that Whites are criticizing themselves.

Jews have privilege all right but it isn’t “white” privilege; it’s jewish privilege, and that’s a term you will never hear anyone in the mainstream ever use and keep their job.  It certainly is a privilege to be able to smear anyone as an antisemite who dares criticize you for any reason, regardless of how justified that criticism is.  It is a privilege to have an invisible underground affirmative action program that will hire you in virtually any profession simply because you are a Jew, regardless of your lack of qualifications or mental stability.  And it’s a privilege to be able to avoid prison by fleeing to Israel when you commit a crime.

Why doesn’t Royce Mann apologize for those privileges?