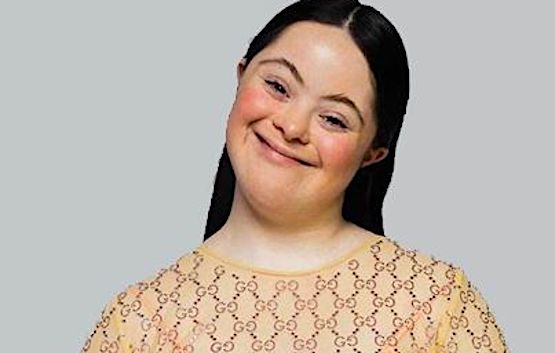 Ellie Goldstein, an 18-year-old model with Down syndrome, recently fulfilled a dream by starring in a Gucci Beauty campaign, and has broken social media records by receiving over 800,000 likes on her post on the official Gucci Instagram page:

If that’s not enough, the teenager will appear on the pages of the Italian Vogue later this month.

Raised in Ilford, a small town in Essex, UK, Goldstein started modeling in 2017 after joining the Zebedee Management modeling agency, which focuses on providing services for models with disabilities, “supplying diverse models and offering sensitive representation,” according to their website.

She was featured in several campaigns in the past, including by Nike and Vodafone, but starring in the Gucci campaign is definitely the biggest yet.

The photo shoot that took place in London captured Goldstein wearing the Gucci mascara L’Obscur, inspired by Gucci creative director Alessandro Michele, who wrote on the Instagram post: “I designed L’Obscur mascara for an authentic person who uses makeup to tell their story of freedom, in their way.”

The post featuring Goldstein gained immense popularity, with over 800,000 likes and thousands of supporters sharing their love on the comment section, with one person commenting: “Beauty beyond limits” and another: “Can this please be our new normal, we are ready for it.”

“I really enjoyed the modelling and loved wearing the Gucci dress. I’m really proud of the photo shoot,” Goldstein replied, while adding that “I’m looking forward to modelling for other brands,” suggesting that the young model is only just beginning her special career.

For the last 100 years Jews have been working feverishly in the media to redefine “beauty”, to invert reality and make what is ugly beautiful and what is beautiful ugly.

They want the world to reflect what they themselves see in the mirror — and to “repair” the world, they must use their power of propaganda to convince people that reality is not what it seems.

The Jews control the rag trade — the fashion industry — and they use it now to promote their subversive, anti-White agenda.

And they know that they will lose money when they put non-Whites and disabled people on the cover of their fashion magazines, but they do it anyway because the agenda isn’t primarily about money — it’s about recreating the world into their own image — tikkun olam.

Real beauty makes Jews feel bad about themselves — like “hairy monkeys” — which is why they’ll spend a king’s ransom on plastic surgeons to look more classically White and beautiful.

No woman goes to a plastic surgeon and demands that he make her look more Jewish like Ellie Goldstein or Barbara Streisand.

But no matter how much money Jews spend promoting ugliness they will never be able to change reality — Ellie Goldstein is being exploited to promote a hateful and subversive agenda, but no one dares mention that this emperor isn’t wearing any clothes.