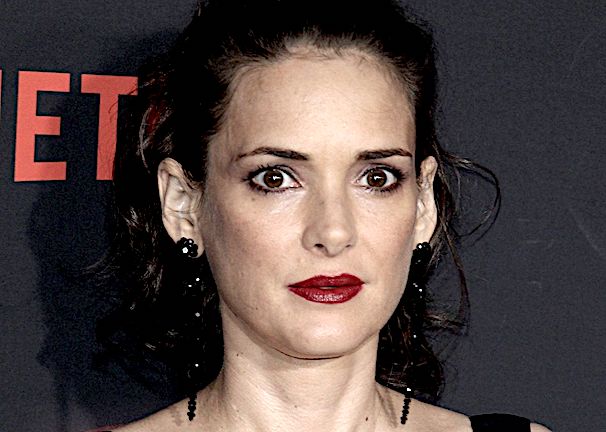 Like many Jews who are under the false impression that they can “pass as White,” perennial B-list actress and convicted shoplifter Winona Ryder (nee Horowitz) lamented in a recent interview that she was once turned down for a role because she looked didn’t look White enough:

Jewish actress Winona Ryder revealed in an interview on Sunday that she was once overlooked for a movie role because she looked “too Jewish” for the part.

Ryder, 48, speaking to The Sunday Times newspaper, said, “There are times when people have said, ‘Wait, you’re Jewish? But you’re so pretty!’ There was a movie that I was up for a long time ago, it was a period piece, and the studio head, who was Jewish, said I looked ‘too Jewish’ to be in a blue-blooded family.”

Talking further about her Jewish background, the “Stranger Things” actress explained that she is “not religious, but I do identify.” She added, “It’s a hard thing for me to talk about because I had family who died in the camps, so I’ve always been fascinated with that time.”

She also talked about encountering antisemites in the film industry and retold one incident involving actor Mel Gibson, who is known for past antisemitic behavior. Ryder said the 64-year-old “Braveheart” star called her an “oven dodger,” a clear reference to the crematoria at Nazi concentration camps during World War II.

Ryder recalled: “We were at a crowded party with one of my good friends, and Mel Gibson was smoking a cigar, and we’re all talking and he said to my friend, who’s gay, ‘Oh wait, am I gonna get AIDS?’ And then something came up about Jews, and he said, ‘You’re not an oven dodger, are you?’”

The actress added that Gibson later tried to apologize to her.

Winona Ryder was famously miscast in one of the worst period pieces ever made in Hollywood history — Martin Scorsese’s disastrous 1993 adaptation of Edith Wharton’s novel “The Age Of Innocence”.

Imagine a Jewish Valley Girl pretending to be a W.A.S.P. blue-blooded debutante in turn-of-the-century New York.

Edith Wharton, like her contemporary novelist Henry James, wrote about New York City at a time when the social elite was Protestant and White — in their novels Jews, if they were mentioned at all, were pejoratively referred to as, say, “swarthy”, “interlopers”, “asiatics” or “social climbers”.

No matter how much money a Jew had, they lacked the bloodline, which their money couldn’t yet buy as it already had in Europe.

To paraphrase Raymond Chandler, in old New York elite circles, Jews were about as welcome as a tarantula on a wedding cake.

Ryder must have become incredibly self-deluded when she was nominated for an Oscar for her “acting” in “Age of Innocence” –  thinking she really could pass herself off as being part of that White W.A.S.P. elite.

But then again that was always the dream of the Jews in Hollywood — thinking that they’ve successfully “integrated” or “assimilated” into White America.

So it clearly stuck in Ryder’s craw when a Jewish producer no less told her that she was “too Jewish” to pull off another role that required her to be “blue blooded,” a euphemism for truly White, not just “whitish” or “white-passing” which is the best that any Jew can hope for.