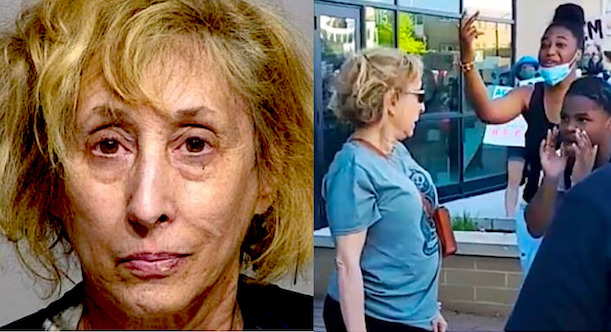 Stephanie Rapkin, 64, a Jewish tax and estate attorney from Shorewood, Wisconsin, is facing charges of battery and disorderly conduct after allegedly spitting on a young black BLM protester and then assaulting a police officer who was attempting to arrest her:

The crowd wanted her to remove her car, which she reportedly parked in a way that would block the path of the demonstrators. The encroaching mob demanded that she move the car but she refused. The demands were becoming more and more frightening, until a young black protester came very close to her, put his hands together to amplify his voice, and screamed. Rapkin’s response was to spit at him.

She was arrested on Saturday after the incident.

On Sunday, Rapkin reportedly resisted arrest when the cops came for her again, and she kneed one of them painfully. This second arrest was for allegedly shoving a man who was writing messages about her in chalk in front of her home.

This is the age-old story of the Jewish “Golem”.

The Jews create a Golem, a Frankenstein-like monster to destroy their perceived enemies — in this case, Jews aided, abetted and openly supported the violent Black Lives Matter “protests” in order to undermine and destroy White America.

Unlike real White people, Jews are perfectly comfortable living in diverse and multi-racial societies, so wherever they go, they try to create that environment — they call this remaking of White societies into their image “Tikkun Olam“.

Of course, in these multi-racial societies, Jews always occupy the top 1%, and live safely in gated communities, behind high walls or in high security buildings, which appears to be the case with Stephanie Rapkin.

But the story of the Golem is a cautionary tale, as all too often, the Golem turns on its creator.

We have seen this happen all across America as the “protesters” have unfortunately attacked Jewish properties, often vandalizing them with antisemitic graffiti — but some Jews have accepted the destruction of their properties as being for a good cause.

Jews now find themselves at a crossroads — and must make a decision.

Does their desire to continue with the destruction of White Christian nations override their own personal safety as their Golem inevitably turn on them, as Rapkin and others have experienced?

In the back of their minds, Jews know that it is gets too hot in the kitchen, they can always make aliyah to Israel.

But how hot do they really want to make the kitchen?