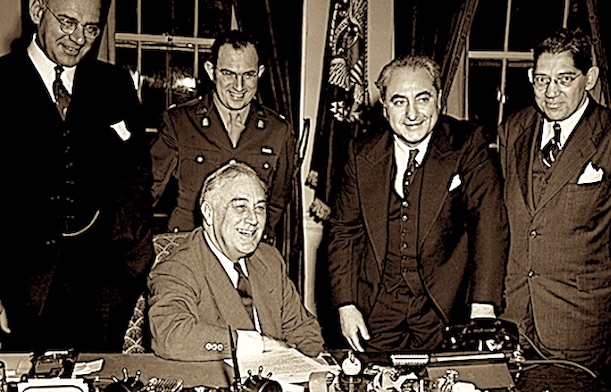 (Times Of Israel) In his book, The Jews Should Keep Quiet: Franklin D. Roosevelt, Rabbi Stephen S. Wise, and the Holocaust, so-called Holocaust™ “historian” Rafael Medoff puts forth a bizarre conspiracy theory alleging FDR so feared a ‘Jewish takeover’ of America that he wouldn’t allow many to immigrate during WWII, which resulted in them “needlessly” dying in the Nazi “death camps”:

“Roosevelt used almost identical language in recommending that the Jews and the Japanese be forcibly ‘spread thin’ around the country,” Medoff told The Times of Israel. “I was struck by the similarity between the language FDR used regarding the Japanese, and that which he used in private concerning Jews — that they can’t be trusted, they won’t ever become fully loyal Americans, they’ll try to dominate wherever they go.”

…During these key years before Roosevelt entered the White House, he also wrote and spoke about “the mingling of white with Oriental blood” and preserving other forms of “racial purity.” According to Medoff, all of this was part of a long-held worldview that later guided Roosevelt during his three terms in office.

“Roosevelt’s unflattering statements about Jews consistently reflected one of several interrelated notions: that it was undesirable to have too many Jews in any single profession, institution, or geographic locale; that America was by nature, and should remain, an overwhelmingly white, Protestant country; and that Jews on the whole possessed certain innate and distasteful characteristics,” wrote Medoff.

…“It wasn’t the public mood that set Roosevelt’s immigration policy; he could have quietly allowed the quotas to be filled without anybody knowing it,” said Medoff. “His harsh policy was a choice that he made, which emanated from his vision of what he thought America should look like.”

…In 1939, as the world went to war, Hitler broadcast his intentions to annihilate European Jewry. Simultaneously, FDR refused to support a bill that would have let 20,000 Jewish German adolescents into the US. Anne Frank and her sister Margot could have qualified to be included, since they were German citizens and under age 16, said Medoff.

Roosevelt’s determination to keep Jews away from America knew few limits, as probed in several chapters of Medoff’s book. Although it is well-known that Roosevelt turned away the St. Louis ship packed with German Jewish refugees, the president took other steps that have been omitted by most of his biographers.

For example, when the Dominican Republic made a public offer to take in 100,000 Jews on visas, the administration undermined the plan. From Roosevelt’s point of view, explained Medoff, that country was too close to home, and Jews deposited there would inevitably come to America. Officials in the US Virgin Islands, too, were willing to rescue Jews by letting them into the country, but Roosevelt halted the plan, wrote Medoff.

According to this wild Jewish conspiracy theory, FDR — whose administration was already chock full of Jews (see list below) — was a virulent closet “antisemite” and “White supremacist” — despite his own reputed Jewish ancestry — who sympathized with the ‘evil Nazis’ and may have indirectly been responsible for sending millions of Jews to the so-called Gas Chambers™.

This is all the more remarkable considering that FDR is still the most beloved U.S. president whenever polled specifically by American Jews — that is, unless Medoff gets his way.

Let’s present a much more rational — and far less paranoid — explanation for FDR’s policies vis a vis the Jews:

In order to have a compelling reason for handing Palestine over to the Jews at the end of the war, the Jews were going to need at least the appearance of overwhelming Jewish suffering during the war, but if they allowed millions to safely immigrate to America, they wouldn’t be able to persuasively claim that they died in Gas Chambers™ and garner international sympathy.

And there can be little doubt that it was Rabbi Stephen Wise — a rabid and hard-nosed Zionist who was skeptical of early Holocaust claims — cynically advised FDR to take that uncompromising stand against immigration.

Rabbi Wise and Bernard Baruch called the shots as far as the administration’s “Jewish policy” — not FDR.

And another reason FDR didn’t feel compelled to “save” these Jews is because he knew that the reports of so-called “extermination camps” were merely Allied atrocity propaganda created to discredit the Germans and gain sympathy for the Jews.

Unlike the public, FDR knew the Jews did not — in reality — face imminent death if they weren’t evacuated from Europe.

He also knew from Stalin that the Soviets were quietly evacuating millions of Jews to safety behind their lines in the East — a fact confirmed by a 1943 report by the Carnegie Foundation — and these were the ‘disappearing’ Jews that would be the basis for the claims of Nazi gassings, cremations, and the so-called Holocaust By Bullets™.

FDR was executing his role in the land grab for Palestine — the ultimate prize of WWII — exactly as literally scripted by the likes of Ben Hecht, Rabbi Wise, Chaim Weizmann, Bernard Baruch, and Ze’ev Jabotinsky, just to name a few.

And here’s a list of the Jewish cabal surrounding the “anti-Jewish” FDR: