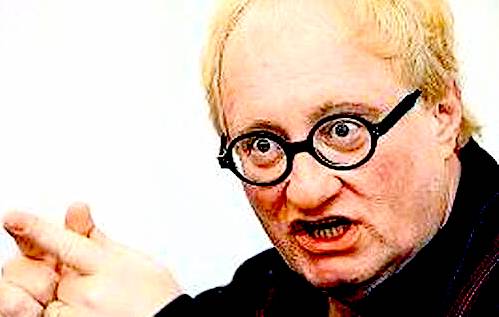 During an interview in Israel to promote his book, Catch The Jew, Tuvia Tenebom warned his Israeli audience about just how much White Europeans “hate” Jews, and how they, not the Muslims, are the “real” enemy of the Jews, and how ultimately this European problem must be dealt with:

What’s happening, and what you people in Israel have to realize, is that your worst enemy today is not the Muslim world. Even today with ISIS and all that nonsense, they are killing each other, by the way.  Your worst enemy is the European world.

Your families came from Europe. But remember the Europeans also murdered your grandparents. The culture of the White man, the Westerners, is terrifying and horrible steeped not in love for mankind, but in hatred for the Jew.

Forget about the Muslim problem. You won’t solve the problem until you look at these people, these ‘human rights’ geniuses, and show them the bitter truth, by holding up a mirror, because that’s where the fate of the Jewish people will be decided, unfortunately.

Ironically, the jewish-controlled media spends an inordinate amount of its time trying to convince White people that Muslims are our problem when, in fact, Muslims are merely a symptom of a deeper problem.

Jews support and encourage White “leaders” like Tommy Robinson in the U.K., who is financed by “right wing” Jews, to focus on the “Muslim” problem to distract us from the real problem: that it was the Jews who have aided and abetted the Muslim invaders in the first place.

Jews like Tenenbom make no attempt to hide their hatred for White Europeans when talking among themselves.

He justifies that hatred by claiming that White Europeans “murdered their grandparents,” which is a blood libel, of course.

The so-called Holocaust was an essential propaganda coup in order to justify the foundation of Israel.

And when White Europeans object to how the Jews in Israel have slaughtered the Palestinians for the last 70 years, Jews like Tenenbom claim they are “antisemites” who “lust” after “jewish blood”.

Looking into Tenebom’s eyes, one gets a sense that this guy may suffer from some kind of  derangement — and the mental health authorities should keep a close watch on him.