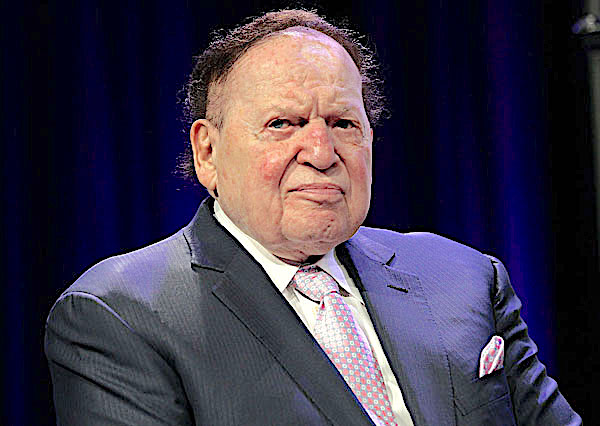 Casino billionaire, Sheldon Adelson, is contributing even more millions into the GOP candidates on top of the already $50 million he’s already committed into order to ensure Trump has support to expand his pro-Israel agenda:

Casino mogul and 85-year-old Jewish megadonor Sheldon Adelson and his wife, Miriam, already listed as the biggest donors of the 2018 midterm election cycle after donating $55 million to Republican Congressional campaigns, are set to give an unspecified “tens of millions of dollars more” to key Republican campaign groups, Politico reported on Thursday.

The new funding is part of “an 11th-hour push to save [Republicans’] congressional majorities,” Politico said, citing “two senior Republicans familiar with the donation.”

The new donations went to two so-called “super PACs” that are helping to fund Congressional campaigns around the US, the Senate Leadership Fund, which has close ties to Senator Mitch McConnell, the Republican leader, and which previously received $25 million from the Adelsons, and the Congressional Leadership Fund, a super PAC allied with House Speaker Paul Ryan that got $30 million from the Adelsons in past contributions.

The exact amount of the new donations is expected to become public when the Federal Election Commission publishes new filings on October 15, the magazine reported.

Though he currently leads the megadonor pack in total contributions to midterm political campaigns, Adelson may soon face a challenge for the top spot from billionaire and former New York mayor Michael Bloomberg, who has vowed to spend $80 million in the campaign’s last weeks to help Democrats gain control of the House of Representatives.

In September, The New York Times reported on the Adelsons’ first round of donations totaling $55 million, saying it made them the “biggest spenders on federal elections in all of American politics.”

The couple is very involved in how their money is being spent, meeting with the consultants and political strategists at Adelson’s office in Las Vegas, the newspaper reported. They ask pointed questions and demand campaign plans, preferably in writing, according to the report.

The article cited more than a dozen people who know the Adelsons who were interviewed for the article and said that Sheldon Adelson’s relationship with US President Donald Trump is not about personal affinity but based on a “mutual appreciation for something both men have built their careers on: the transaction.”

…The Adelsons, strong supporters in the past of Prime Minister Benjamin Netanyahu, were seated in the front row for the ribbon-cutting ceremony for the new US Embassy in Jerusalem in May, the newspaper noted. The embassy moves and other recent decisions of Trump’s regarding Israel have been in line with the Adelsons’ worldview, according to the Times.

Donald Trump would not be President today without enormous support from the jewish community, despite all the attacks coming from the jewish-controlled media.  Sheldon Adelson is a king maker who supported both Trump and Barak Obama, so he has no party allegiance except to Israel.  He got behind his old casino business associate, Trump, because with the “conservative” Trump, he’d help back Israel’s wars of expansion in the Middle East using the U.S. military to take out more “existential” enemies of Israel, such as Bashar Assad in Syria.

While the billionaire Jew, George Soros, continues to finance the radical jewish social agenda in America, Sheldon Adelson is using his jewish wealth to consolidate “conservative” pro-Zionist power on the fake right.  But ultimately both Soros and Adelson are both working toward the same goal — jewish hegemony in the domestic and international spheres.  Through Soros and Adelson, the Jews control the Left and the Right, and the public continues to pretend there’s a difference between the two.