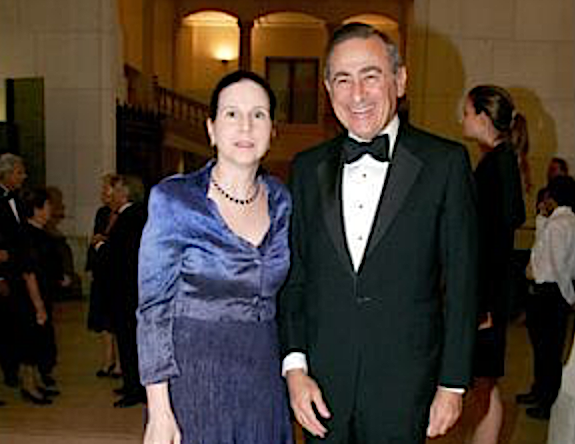 Bernard and Lisa Selz, a wealthy jewish couple, has apparently contributed more than $3 million over the past few years to anti-immunization groups, including, this year, to two groups in New York’s Haredi community, the Washington Post reported Wednesday:

Bernard Selz, a hedge fund manager, and his wife, Lisa, have donated to the arts, culture, education and the environment, until, seven years ago, their foundation began to support groups that dispute government assurances on the safety and effectiveness of vaccines.

According to the Post, the Selz Foundation provides 75% of the funding for Informed Consent Action Network (ICAN), which states it is “actively pursuing several avenues to improve the health and wellbeing of our population by exposing shortcomings with our vaccine program.”

Health officials have blamed ICAN’s and other, similar groups’ influence, among other things falsely linking vaccines to autism—while downplaying the risks of measles—on the growing numbers of parents who refuse to inoculate their children, causing the potentially deadly disease to infect at least 1,044 individuals in the US this year—the highest number in 30 years.

According to a Bloomberg profile, Bernard Thierry Selz, who earned a BA from Columbia College in 1960, has more than 40 years of experience in the Securities Industry. He serves as Managing Member and Portfolio Manager at Selz Capital LLC, which he founded in November, 2003. Previously, he served as Senior Managing Director at ING Furman Selz Asset Management LLC from 1997 to 2003. Before that, Selz Co-founded Furman Selz LLC in 1973 and served as Chairman, Director of Research and Portfolio Manager of the firm from 1993 to 1997. Before that, he served as Director of Research and Chairman at Seiden & DeCuevas from 1967 to 1973. Prior to this, Selz was a Securities Analyst and Assistant Director of Research at Lazard Freres from 1960 to 1967.

Lisa Selz serves as president of ICAN, whose chief executive is Del Matthew Bigtree, a former daytime television show producer. Bigtree, who does not have medical credentials, dispenses expert advice on vaccine safety and the notion of a conspiracy perpetrated by the government and the pharmaceutical industry to cover up the dangers of drugs and vaccination.

Many contemporary poskim, including Rav Shlomo Zalman Auerbach, Rav Yehoshua Newirth, Rav J. David Bleich, Rav Reuven Feinstein, Rav Hershel Schachter and Rav Mordechai Willig, have ruled that there is no basis in halacha to suggest that vaccinations should be avoided.

On the contrary, it is prudent to vaccinate one’s child, and by doing so one fulfills the mitzvah of guarding one’s health. Many poskim view it as the physician’s obligation to attempt to persuade parents to act in the appropriate and prudent manner and have their children vaccinated. It is untrue to state that halacha does not allow vaccinations.

Rabbi Moshe Tendler, son-in-law of Rabbi Moshe Feisntein ztz’l and the posek for the Association of Orthodox Jewish Scientists, an expert on medical ethics and one of the leaders of YU, who lives in and is the head of a synagogue in Monsey, in 2014 condemned the anti-vaccination rabbis, saying: “This is an area in which medicine has made such tremendous progress for the benefit of humanity. […] I believe that [these rabbis] are not speaking under their authority as rabbis, they are speaking simply as uninformed laymen.”

According to tax filings for the Selz foundation obtained by the Post, in 2012 the couple gave $200,000 to a legal fund for British gastroenterologist Andrew Wakefield, who poisoned the medical well years ago by linking measles vaccines with autism.

In mid-May, Wakefield made a long-distance appearance via Skype, in a ballroom in Monsey, Rockland County, New York, to tell already terrified Jewish parents that measles vaccines produce deadly, drug-resistant diseases. The Jewish parents came from Monsey and were also bussed in from Brooklyn and Lakewood, NJ, for a symposium offered by the United Jewish Community Council of Monsey, where Haredi Rabbi Hillel Handler announced: “We Hasidim have been chosen as the target,” and, “The campaign against us has been successful.”

Big Pharma, which reaps in tens of billions in profits each year from their controversial drugs and vaccines, is dominated by jewish owners, CEOs, and investors, so it should raise serious concerns to everyone when wealthy Jews like the Selz Family donate large sums of money to non-profits which are trying to warn the public about the dangers of vaccines.  This support obviously isn’t just about the anti-vaccine movement within the Orthodox Jewish community, as that reflects only a tiny fraction of the people who are fighting for freedom of choice and informed consent.

But the jewish-controlled, pro-pharmaceutical mainstream media has been running regular stories in the last year attacking the Orthodox communities for not complying with vaccine mandates, yet strangely no one is claiming these attacks are “antisemitic”, nor are the attacks on the Selz family for their support of the anti-vax movement being smeared as “antisemitic”, as we’ve all come to expect from the likes of the ADL when any Jews are accused of “wrong doing”.  The jewish media will no doubt quickly drop this story about the Selz funding as it does not fit the standard narrative that only “fringe” White Christian home schoolers, the Amish, and Holocaust deniers are behind the “anti-vax” movement.