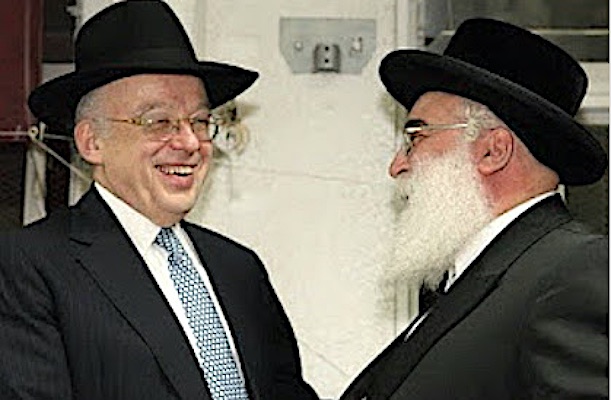 This is the story of how Jewish billionaire, George Karfunkel, who sits on the board of directors of Kodak, is alleged to have used his inside knowledge of the stock pricing and trading to donate $180 million in over-valued stock to an obscure and recently-founded ‘synagogue’ in Brooklyn of which he just so happens to be the President, all of which could net him a ‘charitable’ tax write-off worth upwards of $100 million:

In late July, a wild chain of events occurred when the Trump administration decided to give Eastman Kodak, the film giant that went bankrupt in 2012, an unprecedented $765 million government loan through the Defense Production Act. Under this deal, which President Trump touted, the company would manufacture ingredients for an assortment of drugs, including hydroxychloroquine, the antimalarial drug Trump has repeatedly promoted—without scientific support—as a treatment for COVID-19.

The agreement was officially announced on July 28, but the previous day, the price of Kodak’s stock began to surge, following local media leaks about the loan in Rochester, New York (the home of Kodak). This buying frenzy continued for a couple of days. During that time, billionaire investor George Karfunkel, a member of Kodak’s board of directors, made an unusual transaction: He donated 3 million Kodak shares—worth up to $180 million at the time—to a relatively new Jewish congregation that has almost no public profile.

The out-of-the-ordinary loan for Kodak came from a new and little-known government agency: the US International Development Finance Corporation. This outfit was created to provide foreign aid—not domestic assistance—and it is headed by Adam Boehler, a former roommate of Jared Kushner. In March, Kushner tapped Boehler to be part of his shadow coronavirus task force.

The Kodak deal is now under investigation by several House committees, which have raised questions about Kodak’s “lack of pharmaceutical experience” and about stock options handed to executives and board members right before the announcement. Sen. Elizabeth Warren (D-Mass.) has called for a probe of whether “one or more individuals may have engaged in insider trading.” In a letter to the Securities and Exchange Commission, she observed, “This is just the latest example of unusual trading activity involving a major Trump administration decision.”

…On Friday night, the International Development Finance Corporation tweeted: “Recent allegations of wrongdoing raise serious concerns. We will not proceed any further unless these allegations are cleared.” In response, Kodak stock plunged nearly 30 percent on Monday.

Kodak did not reply to a request for comment. It has created a special committee to conduct an internal review.

In the middle of this spree, Karfunkel, a major investor in Kodak, and his wife, Renee, donated those 3 million shares to an entity called Congregation Chemdas Yisroel, according to an SEC filing. They did so on July 29, the day the stock price hit $60, so those shares could have been worth as much as $180 million at the time of the gift. If the donation was executed at the end of the trading day, its value would have been $99.6 million.

Given that Congregation Chemdas Yisroel is registered as a tax-exempt religious organization, the Karfunkels will be able to claim this donation as a tax deduction. That means they could pocket a deduction between $52.5 million and $180 million for a bloc of stocks that two days earlier was worth $6.39 million. (The donation also lowered the Karfunkels’ holdings in Kodak to 4.4 percent—which is below the 5 percent threshold that requires investors in a publicly traded company to report their stock transactions.)

The gift to Congregation Chemdas Yisroel from Karfunkel, an Orthodox Jew who has supported various Orthodox schools and synagogues in Brooklyn, was noted in passing in media accounts of the Kodak stock frenzy. But what went unreported were details regarding the recipient of this immense gift. And it is tough to find any traces of this Congregation Chemdas Yisroel. It has no website. It is not listed on the synagogue locator of the Orthodox Union, a large support network for Orthodox congregations. There is no information on it within various online databases, beyond its existence as a corporate entity.

Chemdas Yisroel was registered as a Delaware corporation in December 2018. Two weeks later, Chemdas Yisroel was registered with the New York Department of State as a Brooklyn-based entity. A search of Delaware corporation records for groups with the word “congregation” in their names yielded only 19 entities of which 10 appeared to be Jewish organizations. The New York State division of corporations lists hundreds of organizations that have “congregation” in their names and that appear to be Jewish.

The New York corporate registration for Congregation Chemdas Yisroel listed its address as that of an accounting firm in Brooklyn, Roth & Co., and Abraham Roth, the co-managing partner of the firm, was cited as a point of contact. Roth did not respond to multiple requests seeking comment about Chemdas Yisroel and Karfunkel’s massive donation.

George Karfunkel and his brother Michael were born in Hungary and grew up in Brooklyn, their father a fishmonger and a religious scholar, according to a Forward article published in 2016 when Michael died. (The headline: “Michael Karfunkel, the Orthodox Billionaire No One Heard Of, Dies at 72.”) Through a wide collection of businesses, they became one of the wealthiest American families. In 1976, George was on an Air France plane hijacked by Palestinian terrorists that was flown to Entebbe, Uganda, where Israeli commandoes mounted a rescue.

The brothers were employees at a mutual fund boiler room called Economic Planning Corp.; their bid to diversify the firm by having it engage in the capital markets ended with them at the center of a wide-ranging pump and dump scam that collapsed in 1971…[T]he Securities and Exchange Commission injunction and suspensions they received hardly set them back.

The brothers went on to create their own financial powerhouse. In 2008, they sold their American Stock Transfer & Trust Co. for close to $1 billion. (In July 2019, Anne Neuberger, George Karfunkel’s daughter, was named head of the National Security Agency’s new cybersecurity directorate.)

Both brothers have been highly regarded within the Orthodox community of Brooklyn for their philanthropy. According to the Foundation for Financial Journalism report, “Their foundations give almost exclusively to yeshivas and synagogues connected to Haredi Judaism, many of which are affiliated with the Belz Hasidic sect.” The report also noted that their foundations “employ risk in a fashion rarely seen in other private foundations,” and it outlined financial transactions mounted by the foundations involving complicated stock trades. And the Forward reported, “The charities the two brothers controlled are among the largest, and most unusual, Jewish private foundations in the country.”

Even with this long history of philanthropy, George Karfunkel’s gift of Kodak stock to Chemdas Yisroel stands out as much greater—by a factor of 15 to 50—than the grants on the most recent tax filings of the Karfunkel Family Foundation and the Chesed Foundation of America…

What happened to the 3 million Kodak shares after Karfunkel and his wife donated them to the congregation? Were they sold? If so, at what price? How might this organization—with no publicly identified officials—use a windfall of tens of millions of dollars or much more? There are no answers. The public trail ends with the stock transfer…

UPDATE: After the above story was published, the Wall Street Journal also reported on George Karfunkel’s donation of Kodak shares to the Congregation Chemdas Yisroel. The newspaper noted that Garfunkel is listed as the president of the synagogue in New York State charity-registration records. It reported that this donation “would make it the single largest gift recorded to a religious group, based on a list maintained by the Chronicle of Philanthropy.” According to the Journal, “The New York paperwork describes the congregation as an Orthodox Jewish synagogue that conducts religious services, classes, lectures and seminars, and would use any funds raised only for religious, charitable and educational purposes. The congregation appears to have a small space attached to a three-story apartment building on a quiet side street in the ultra-Orthodox Jewish neighborhood of Brooklyn’s Borough Park. A small nameplate on the building’s exterior is the only visible sign of its location.” In its charity registration records, the congregation lists Reinhold as its secretary and Roth as its director. With Karfunkel, they are the only officers of Chemdas Yisroel. Karfunkel is also listed as the “Chief Financial Officer or Treasurer.”

Sure, a ‘synagogue’ comprising three Jewish individuals who appear to have conspired together to bilk the U.S. government out of nearly $100 million dollars in tax abatements — and this ‘synagogue’ will get to keep the money it gained from in turn selling that hyper-inflated stock before it crashed — a scam that could net him $350 million depend on what they sold the stock for.

On the other hand, since the shiksa, Martha Stewart, didn’t have Jewish privilege, she actually spent time in jail for alleged insider trading that netted her a paltry $45,000.

Rest assured, though, that since President Trump named Karfunkel’s Orthodox daughter — Anne Neuberger — head of the National Security Agency’s (NSA’s) new cybersecurity directorate — this investigation may have to be dropped for issues of  ‘national security’.

We recently reported on a story about a police investigation of organized crime in the Ukraine required a list of names of all the Orthodox Jews in a certain city — the request predictably was smeared as ‘antisemitic’ and denied.

If you think Jews go to synagogues merely to pray rather than conduct business, you don’t understand the true nature of Judaism and its holy book The Talmud, which provides a blueprint of how to bilk the goyim.

The fuzzy line between Jewish high finance, criminality and so-called ‘philanthropy’ is never clear — intentionally so — and it would seem that behind every great Jewish fortune lurks a great crime.

A prominent 20th century German statesman once observed that the real reason Zionist Jews wanted to found the State of Israel was something other than fulfilling prophecy:

“While the Zionists try to make the rest of the World believe that the national consciousness of the Jew finds its satisfaction in the creation of a Palestinian state, the Jews again slyly dupe the dumb Goyim.  It doesn’t even enter their heads to build up a Jewish state in Palestine for the purpose of living there; all they want is a central organization for their international world swindler, endowed with its own sovereign rights and removed from the intervention of other states: a haven for convicted scoundrels and a university for budding crooks.  It is a sign of their rising confidence and sense of security that at a time when one section is still playing the German, French-man, or Englishman, the other with open effrontery comes out as the Jewish race.”