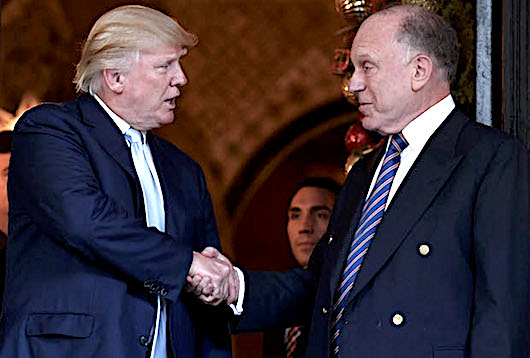 Billionaire jewish ‘philanthropist’ Ronald Lauder is funding a $25 million campaign against political candidates in the United States who support or ‘normalize’ so-called ‘antisemitism’:

Lauder, the president of the World Jewish Congress, announced the new campaign, called the Anti-Semitism Accountability Project, or ASAP, on Monday. The effort will include a nonprofit organization and a super PAC.

Lauder will have the final say on which politicians — federal, state and local — will be targeted for defeat, according to The New York Times.

He is a longtime Republican donor, but Lauder told the newspaper he planned to use the organization to go after both Democrats and Republicans who traffic in anti-Semitic language and tropes.

A statement announcing the launch of ASAP said it would “also respond and take action against institutions and cultural figures who support anti-Semitism.” Lauder also told The Times that he would look into universities and their professors, and pressure them to stop anti-Semitic statements and actions by contacting major donors.

ASAP will partner with existing organizations that are working across the country to combat anti-Semitism, the statement said, and encouraged contact from those groups through its website….

Lauder told The Times that he has hired teams of researchers to follow political races across the country “from the most local to the major ones” to track anti-Semitic comments.

What other ethnic group feels a need to spend billions in order to silence their critics?

Jews claim that if they don’t combat even the most innocuous anti-jewish comment, the next thing you know, Jews will be thrown in gas chambers — for no reason whatsoever.

They have the unique “right” to vet anyone and everyone who runs for any office, including local dog catcher, because if they don’t, we could have another Hitler killing Jews for no reason whatsoever.

If Jews do not have complete control over every aspect of our society, we are so irrational and unpredictable that we will just start torturing and killing Jews for no reason whatsoever, as the Germans can attest.

Therefore, we actually should be grateful for elite Jews like Ronald Lauder who are willing to literally have anyone permanently removed who opposes their interests.  He is willing to save us from ourselves.

“Time for talk is over,” powerful Jews are now saying.  It’s time for Jews to stop playing ‘nice’ with the goyim and start getting back in touch with their “inner Bolshevik“.