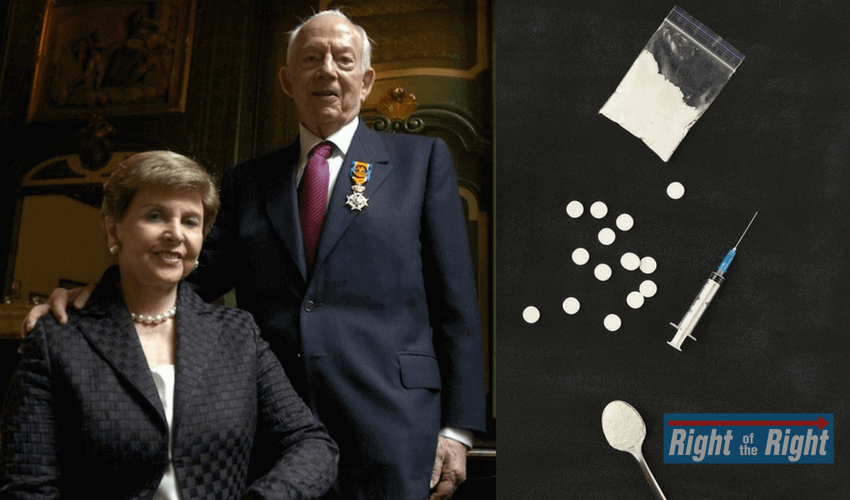 The opioid epidemic is spiraling out of control and it’s hitting White middle class Americans the hardest.

But make no mistake – the “opioid crisis” is no accident and it didn’t come out of nowhere. In fact, it was a calculated business decision that was engineered through powerful lobbying efforts and pressuring the FDA to classify prescription opioids as “non-addictive” and safe for routine pain treatment.

So who would push these drugs onto the market knowing full well the dangers?

Look no further than the wealthy jewish Sackler family.

These jewish billionaires are modern day drug runners who have profited tremendously off death and addiction of White Americans. They are protected by armies of lawyers and sit at the top of their big pharma empire.

Fortunately, they are finally getting sued, although they will surely not face the true justice they deserve:

Members of the Sackler family, who’ve made billions pushing their deadly OxyContin drug on the masses are arguably responsible for more deaths than any Mexican drug cartel. Instead of being hunted down at their plush mansions by DEA agents, they are rubbing elbows with members of Congress. Now, however, for the first time, the family is being targeted by a landmark lawsuit for the damages they knowingly caused with their products.

On Tuesday, the state of Massachusetts filed a lawsuit against the multi-billionaire Sackler family over the role their drug OxyContin has played in sparking one of the worst addiction and overdose epidemics in history. The lawsuit accuses the company, Purdue Pharma, and its heirs of spinning a “web of illegal deceit” which fueled the deadly crisis in which America currently finds itself.

No doubt it’s just a “coincidence” that the family responsible for this deadly narcotic is jewish, even though countless jewish families dominate the pharmaceutical industry.

The Sackler family made their billions by aggressively marketing drugs to the unsuspecting public, using  Madison Avenue advertising and promotion techniques. Many people get started out on Oxycontin or other prescription opioids after routine surgeries, only to become full-blown heroine addicts within a short time.

Because the Sacklers funded a hospital in Tel Aviv and various New York art museums, don’t expect them to get anything more than a slap on the wrist.