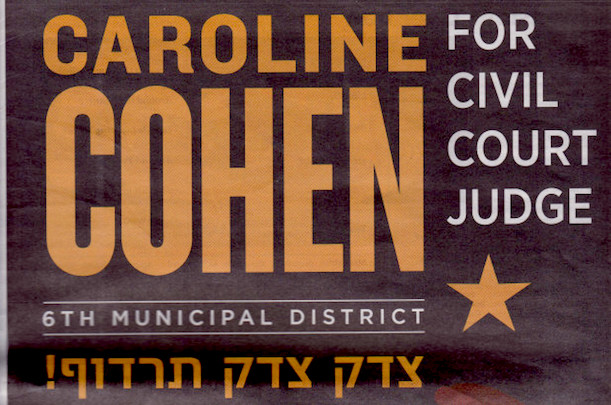 A Jewish Brooklyn judicial candidate says she was robbed of victory when her Protestant opponent changed her name to Cohen to seem more kosher at the ballot box:

“It is deception,” Tehilah Berman, 49, told The Post of rival lawyer Caroline Piela’s legal name change to Caroline Cohen during a nasty race for Civil Court judge. “It was wrong to deceive the Jewish and non-Jewish public.

“Catering to religious groups is not proper in this democracy,” said Berman, an Orthodox Jew from Flatbush. “People should be proud of their religion and not make believe they are something else.”

The name Cohen is taken from her husband Steven Cohen, her high-school sweetheart. And though they married in 2006 and she was known socially and professionally as Caroline Piela-Cohen, she didn’t officially change her name to Cohen until just weeks before she announced her campaign.

Cohen, fresh off her primary win last week, insisted her name change was just an “administrative concern” and that she in no way attempted to misrepresent her identity.

For many generations now, Jews have been changing their last names to more White-sounding ones in order to appear less “ethnic” and deceptively pass themselves off as “one of the sheep.”  Issur Danielovitch, for example, changed his name to Kirk Douglas to become just one of thousands of Jews who made this change to cash in on the ability to pass as White in a country that was over 90% White and Christian only a couple of generations ago.  Prior to doing this in America, many of their ancestors had done the same thing in Germany and Russia.  Changing names is as jewish as bagels and lox.

Now that Jews have risen to unrivaled political and social power in America, and being overtly jewish is an asset rather than a liability, it appears that some “goyim” are now beating them at their own game.  Changing your name from “Smith” to “Goldberg” will, in fact, open doors that would be closed to you otherwise.  You’ll be accepted to Ivy League schools, to elite Wall Street firms,  to high-powered jobs in the media and Hollywood, and you’ll be a shoe-in for any Congressional Seat in Washington.

And you’ll be able to accuse anyone who criticizes you as an “antisemite”.  If you really want to undermine and destroy jewish power in America, just ten million Whites could do it with a simple name change, and if that happened, no doubt Jews would cry foul and want to make it illegal to take jewish last names, and invoke “another” Holocaust of jewish identity.