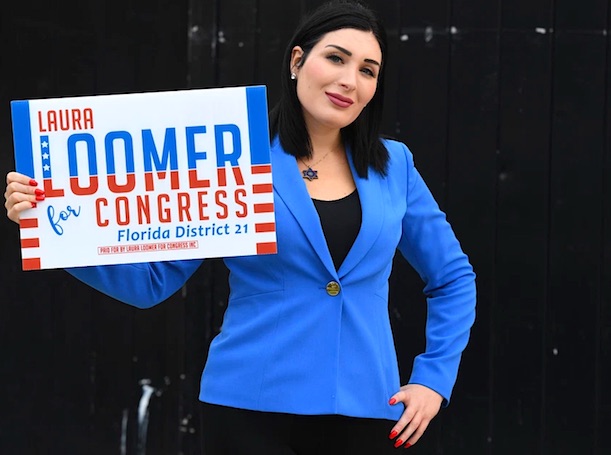 Laura Loomer, after poking around the alt-Right and failing to find an identity or generate any credibility, is now running for Congress in Florida, as a Republican no less, against another Jew, an incumbent Democrat, in the Jewish stronghold of West Palm Beach:

At twenty-seven years old, she has become a prominent activist who hasn’t let her age nor the constant censorship deter her. Laura bravely advocates for Jewish values, which is why she is running for Congress. She is an educated woman who graduated from Barry University with a degree in broadcast journalism. This election will be the first time in American history in which two Jewish women will run against each other.

Laura seeks office as a Republican not just because she supports several of Trump’s policies aimed at combating anti-Semitic narratives, particularly on college campuses, but because she knows the Jewish American community needs her. She understands that it is imperative to “boycott big tech because they are the major problem in the current rise of antisemitism.” “I want Jewish Americans to be a protected class. In the United States hate crime laws… they list ‘Jewish,’ as a race. Elected officials will be held accountable. I will also call out the systemic Jew Hatred that has become a major issue.”

Loomer says “It’s time for Jews to wake up!” She holds the conviction that the Democratic Party is the demise of American Jewry. Many of our Democratic Party leaders stand firmly against the Jewish community and the Jewish nation state, Israel. Far too few are condemning them.

Laura is no stranger to criticism. She has addressed anti-Semitism in the Democratic Party for years. On many occasions, she has called out Ilhan Omar, Rashida Talib, and the rest of the “Squad” members’ anti-Semitism, most recently when, a few days ago, Palestinian media praised the Squad for its anti-Zionism and stance against Israeli sovereignty in Judea and Samaria. In the Squad’s letter, Loomer points out that “they supported organizations that are linked to BDS, as well as the Palestinian Front for the Liberation of Palestine; which is categorized as a hate group in many counties.”

Laura opines that “[i]f there is a second Holocaust, the Jewish Democrats will be to blame. History is repeating itself.” She continued “the ADL receives millions of dollars a year but won’t say anything. They were complicit with Obama and Farrakhan.” Many Jews feel this way. There has been an outcry for a leading voice to speak out on the rise of Farrakhan’s “teachings.” Loomer added “[Farrakhan] seems to have ridden the wave of the BLM movement and attached the Democratic left, which is a strong force in the media and isn’t a friend to the Jew.”

The rise of anti-Jewish incidents has been profound and has included Brooklyn Jews being physically assaulted in the streets, the shooting in NJ done carried out by Hebrew Black Israelites, and the stabbing at the Monsey shul. When speaking on this, Laura said “We need to call it for what it is. It’s Jew Hatred. Which I find ironic because Jews helped the black community during the civil rights era. We were standing side by side. Now, they are being radicalized by Louis Farrakhan.”

“Joe Biden has said they should teach Islam in school. But no Christianity? No Judaism? Why don’t we give out free Qurans? Studies have shown there’s more hatred for Jews within it than Mein Kampf,” she told me. Laura believes a red-green alliance is taking place. Namely, “that Democrats, BLM, and these Islamic groups are manipulating the system in a way where you can’t even speak out against them without them telling you you’re racist or Islamophobic.” Laura is known for her strong right-wing beliefs but are there truths to this?

…Ms. Loomer has been silenced by many big companies such as Facebook, Twitter, Instagram, Paypal, and Chase. This has not stopped her. She has found many ways to get her voice heard. She is determined to make sure that America remains America and that the Jewish people in America remain safe. We need her in office. “I was in Israel for the move of the embassy, not a single Democrat member of congress was there. Out of the twenty-eight Jewish members of congress, twenty-six of them are Democrats! They weren’t there. They don’t condemn the members and their Jew hatred.”

…Antisemitism is on the rise. The majority of hate crimes happening in the United States target Jews and no one speaks about it. Laura said lastly, “I will be putting Jews on trial. They need to decide who they want to represent them, their values, and who will stick up for their survival. That’s what I will do.”

Loomer is running in an area north of Miami that is heavily populated by Jews, so she can make such blatant Jewish supremacist remarks without fear of offending anyone — except perhaps an ‘antisemite’.

Imagine a White candidate saying that he wanted to make Whites a protected class — the Jews would make sure his political career would be over.

Of course, Jews are already a ‘protected class’, but apparently Loomer wants to make it official — spelled out in Federal law to take advantage of the fact that Jews are now recognized as a racial — not just religious — minority.

And by ‘protected class’ she ultimately means that no one will be allowed to criticize Jews or Israel without the risk of being prosecuted for ‘inciting violence’ against Jews.

And by suggesting that “Jewish Democrats” will be responsible for the “next” Holocaust, Loomer has unwittingly gone off script by implying that Jewish behavior does, in fact, cause antisemitism — and ultimately violence against Jews.

Loomer seems to be on the same page as historian David Irving who observed that Jews themselves were responsible for ending up in Auschwitz.

Doesn’t Loomer know that it official policy of the ADL that Jews are never responsible for “Jew hate“?

Jews are the world’s ultimate victims, but Loomer is threatening to take that status away from them.

Elderly Jews in Florida whose Jewish identities depend on fear probably won’t like that idea very much.