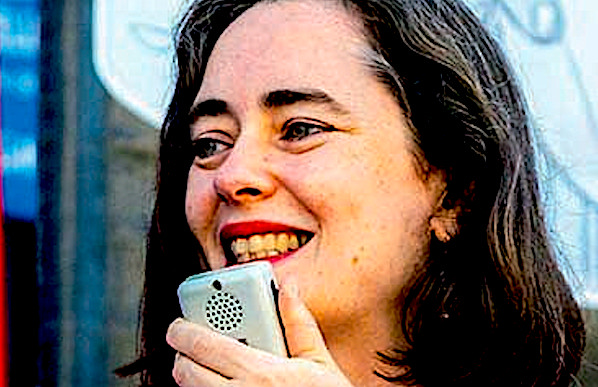 (Jewish Chronicle) Jewish Labour councillor Jo Bird is under investigation by The Party for a third time after lamenting that the new report into antisemitism in the Labour Party demonstrates how racism against Jews has been deemed more “worthy of resources” than against other ethnic minorities:

The JC had highlighted last week how the Wirral councillor had used a meeting of left-wing activists protesting over the decision to suspend former leader Jeremy Corbyn to launch her own attack on what she described as the “privileging” of racism against Jews.

It is understood that Labour chiefs have now launched an investigation into comments made by Ms Bird relating to the report.

Cllr Bird – who has been suspended on two previous occasions for comments relating to antisemitism – told last week’s meeting of the ‘Don’t Leave, Organise’ group: “As a Jew, I worry about racism against Jewish people.

“I also worry about privileging the racism faced by Jewish communities in this country as more worthy of resources than other forms of discrimination such as against black people, Palestinians, Muslims and refugees.

“Abuses of power are measured in detentions, deportations and deaths. Privileging one group over another group is divisive. It’s bad for the many, as well as bad for the Jews.”

Last year, the JC had highlighted how Ms Bird had repeatedly attempted to joke about what she described as “Jew process” as a substitute for the term “due process” in speeches to activists.

The Jewish Voice For Labour member also regularly gave other speeches in which she repeated the claim: “Seriously, one of the things that does worry me is the privileging of racism against Jews, over and above – as more worthy of resources than other forms of racism.”

An audio copy of a speech Ms Bird gave was sent to the JC in which she had changed the words of the famous post-Holocaust poem “First They Came For..” by the German Lutheran Pastor Martin Niemöller to suggest “anti-Zionists” were under attack…

She added: “I’m speaking in a personal capacity. I am a Jewish woman. My Jewish great grandparents fled fascism in Europe and my grandad’s cousins perished in the Holocaust…

A Labour Party spokesperson said: “The Labour Party takes all complaints of antisemitism extremely seriously and they are fully investigated in line with our rules and procedures, and any appropriate disciplinary action is taken.”

Jewry has always been the loudest voice bemoaning “racism” against “ethnic minorities” — the flotsam and jetsam of the Third World landed in White Christian nations — because it was good for the Jews.

If Jews could establish “minority rights” for ‘downtrodden’ Blacks, they would establish the same rights for Jews through the backdoor without drawing attention to their real goal — promoting their self-interests.

Jews would then exercise their “minority rights” to ultimately facilitate their ascendancy over the White majority whom they wished to infiltrate, undermine through social critique, then replace.

And what we see here is a competition among these minorities and Jews over which form of “racism” takes a priority — Jews complain that antisemitism isn’t as important as White-on-Black racism, and Blacks complaining about Jewish privilege.

But unlike Blacks, Jews have had the unique ability to “pass” as White — which has given them an enormous advantage over obvious non-White “minorities”.

The current witch hunt for antisemites in the U.K. Labour Party, headed by the shabbos stooge Keir Starmer, arose after Jews exercised their inordinate power to insist that everyone adopt the widest, most draconian “working definition of antisemitism” by the International Holocaust Remembrance Alliance, which spuriously conflates anti-Zionism with antisemitism.

This expansion of the already meaningless definition of antisemitism just threw fuel on the fire by making everyone on the political Left, which traditionally advocated for Palestinian rights, ipso facto “antisemitic” for doing so — regardless if they were Jewish or not, like their disgraced leader Jeremy Corbyn.

This ongoing bolshevik revolution will take no prisoners while it consumes itself.