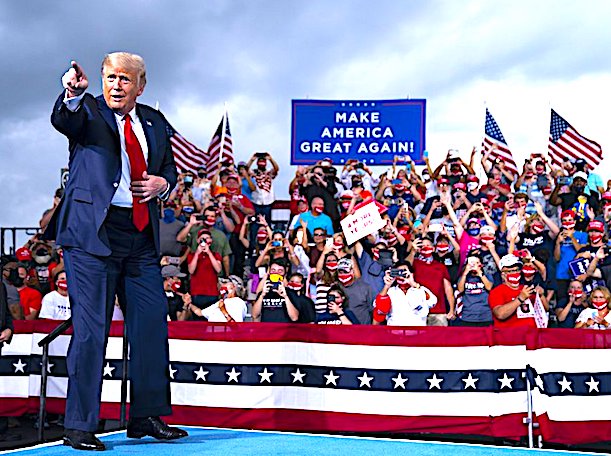 As reported by the Jerusalem Post, a team of Jewish ‘researchers’ led by R. Douglas Bernheim and Nine Buchmann at the elite Stanford University have published a study titled, “The Effects of Large Group Meetings on the Spread of COVID-19: The Case of Trump Rallies,” which makes the astonishing claim that 700 people have died of COVID-19 from being exposed to people who attended pro-Trump political rallies in 18 U.S. cities:

We investigate the effects of large group meetings on the spread of COVID-19 by studying the impact of eighteen Trump campaign rallies. To capture the effects of subsequent contagion within the pertinent communities, our analysis encompasses up to ten post-rally weeks for each event.  Our method is based on a collection of regression models, one for each event, that capture the relationships between post-event outcomes and pre-event characteristics, including demographics and the trajectory of COVID-19 cases, in similar counties.  We explore a total of 24 procedures for identifying sets of matched counties.  For the vast majority of these variants, our estimate of the average treatment effect across the eighteen events implies that they increased subsequent confirmed cases of COVID-19 by more than 250 per 100,000 residents.  Extrapolating this figure to the entire sample, we conclude that these eighteen rallies ultimately resulted in more than 30,000 incremental confirmed cases of COVID-19. Applying county-specific post-event death rates, we conclude that the rallies likely led to more than 700 deaths(not necessarily among attendees).

So in other words, they looked at COVID rates before and after Trump rallies, and if there was an increase, they blamed that increase on the Trump rallies, not on the obvious increase rate of testing nation-wide.

And we know the rate of testing has gone up exponentially — using the unreliable and easily manipulated PCR tests — and predictably so have the “cases” — but given a death rate of less than 0.01% per positive testing, it is mind-boggling how this elite group at Stanford came up with such a high death rate.

And they made this spurious correlation without, of course, bothering to do any contact tracing.

Apparently, after becoming infected with COVID while attending these Trump “death” rallies, these thoughtless Trump supporters immediately visited the nearest nursing homes or hospitals so as to infect as many octogenarians with life-threatening co-morbidities as possible — and kill them.

This ‘study’ is a perfect example of Marxism masquerading as ‘science’ — literally massaging data to conform to a radical political agenda.

Of course, this study lacks a reliable control or contrast group — such as comparing COVID rates in cities where there were Biden rallies, BLM protests, or even protests over the lockdowns.

Similar so-called ‘experts’ have made it clear that large protests by the radical Left do not spread the coronavirus.

But the takeaway here is clear — your enthusiastic political support of President Donald Trump is literally killing people, and every heartless person who votes for Trump has blood on their hands — or something along those lines.