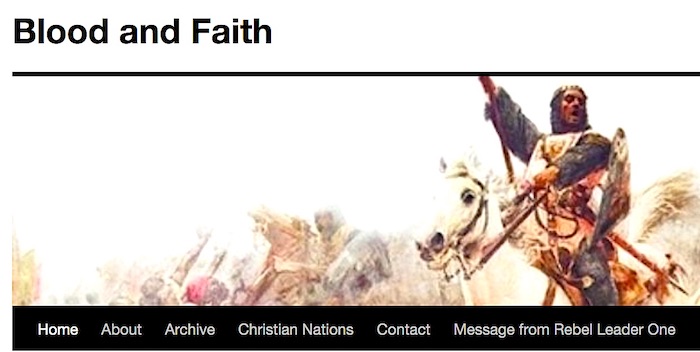 “Jesus Christ came to save the whole world from the Jews — the founders of the original Anti-Christ religion, they who are the seed of the Serpent, that brood of vipers,” Berggren wrote in an Oct. 4, 2020, post on his website titled “Jews are Not God’s Chosen People. Judeo-Christian is Anti-Christ.”

Later in the post he writes, “Jewish ideas poison people.”

Berggren has been sharing his extremist and anti-Semitic views under his real name for years while working as a mid-level civil servant. Politico first reported the connection on Friday after being tipped off by current and former State Department officials.

Berggren espouses the idea, common among the far-right, that white people are at risk of being eliminated through demographic change and organized persecution. He commonly rails against Black Lives Matter and other social movements identified with the left.

On Friday afternoon, he published a new post titled, “Welcome, Politico readers!” He concluded the post with a PS: “If you have not already surmised, my ideas are my own and not a reflection of any employer, company, agency, country, etc. 🙂”

As commentary on this article we will provide one of Fritz Berggren’s own excellent essays entitled “Jewish Fragility“:

Jewish Fragility refers to feelings of discomfort a Jewish person experiences when they witness discussions around race and theology. This may trigger anger, fear, guilt, and violence. Some Jews may become insecure when other people groups claim privileges that Jewish people enjoy.

If a Jewish person becomes defensive, a non-Jew may feel obligated to comfort the Jew. For example, some Christians comfort Jews by telling them they are “God’s children,” while some Europeans speak words establishing racial self-hatred. These non-Jews seek to unburden themselves from socially constructed sin accusations (racism or anti-semitism).

Manifestations of Jewish fragility commonly include accusing others of what they do themselves. These include, but are not limited to:

-Inventing a social sin that only applies to non-Jews (anti-semitism).
-The privilege of their own racial homeland while accusing others of a social sin (racism) for seeking the same privilege.
-Establishing organizations promoting the interests of their own race while denying that privilege to others, specifically Whites.
-Violence toward those who do not submit to religious, historical, and cultural narratives promoted by the Jews.

One manifestation of Jewish fragility was the reaction to Jesus Christ, who verbally chastised them for hypocrisy. As a result, the Jews used their power and influence (Jewish privilege) to have him executed.