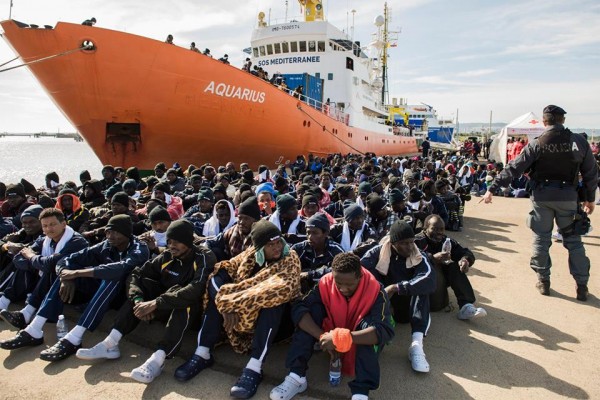 Jewish lawyers are in a lather now that Panama has revoked the registration of the NGO migrant transport ship Aquarius 2, which was the last remaining charity rescue vessel operating in the central Mediterranean area:

The move by the Panama Authority (PMA) means that once the Aquarius 2, operated in part by SOS Mediterranee, arrives into port it will be deflagged and barred from operating. As such, there are no more NGO vessels able to transport people from the Libyan coast in the near future unless the ship can find a new flag to sail under.

SOS Mediterranee, one of the charities that operates the Aquarius, said in a statement it was reeling from news of the revocation, which it said followed pressure from the Italian government.

“On Saturday … the Aquarius team was shocked to learn of an official communication from the Panamanian authorities stating that the Italian authorities had urged the PMA to take ‘immediate action’ against the Aquarius,” it said. -Reuters.

Italy’s interior minister Matteo Salvini denied that the Italian government applied pressure on Panama. He has previously accused SOS Mediterranee and similar groups of acting as a Mediterranean “taxi service” for migrants, and that the Aquarius 2 had hindered the work of the Libyan coast guard by ignoring instructions.

Public backlash against the influx of hundreds of thousands of migrants by sea over the past five years was a large part of the rise of Italy’s anti-establishment coalition government, which took office in June and immediately began cracking down on migrant vessels.

“They can change their name and flag another thousand times but Italy’s ports will remain shut to these gentlemen,” he said.

This is how easy it is to shut down this African and Arab invasion of Europe — but why has it taken this long to figure this out?  Or need we really ask?  The invasion will continue, of course, once the army of jewish lawyers who work for these nation-wrecking NGOs work around these legal stumbling blocks thrown in their path.

If we want to curb the invasion permanently, we do what Hungary has done –make it illegal to financially aid or abet any migrant or asylum seeker.  Make that type of assistance an illegal form of treason, with a death penalty punishment — the flood of migrants would disappear overnight.  Bring charges against George Soros and watch The Beast cry out, “Antisemitism!”