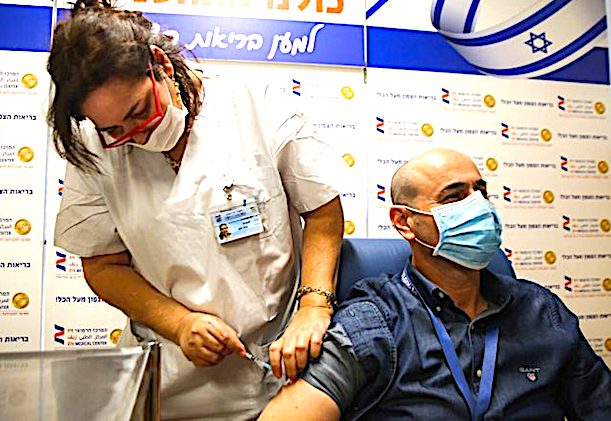 Anshei Emet (People of Truth), a group against coronavirus vaccination, filed a suit against the Israeli government with the International Criminal Court (ICC) earlier this month, arguing that Israel’s administration of the coronavirus vaccine and policies to encourage vaccination are considered “crimes against humanity” according to the Nuremberg Code:

“It is our intention to present to you and detail how in the State of Israel this year, the Government of Israel with its ministers and its Knesset members, heads of cities, and additional senior factors, violate the Nuremberg Code in an unlawful manner, blatant and extreme. And to our regret, not only in a single aspect but many – too many!” the group wrote in the suit filed by Tel Aviv-based A. Suchovolsky & Co. Law Offices.

Israelis were unlawfully not informed that they were taking part in a “medical experiment,” and Prime Minister Benjamin Netanyahu had signed an agreement with Pfizer to receive a large amount of vaccinations if Israelis were used as “experimenters,” Anshei Emet argued. The state did not present “alternatives for treating the Corona disease” and concealed information regarding the vaccines, the suit said.

In an interview last month, Pfizer CEO Albert Bourla called Israel the “world’s lab” due to the country’s high vaccination rate, which provides real-world data on the vaccination campaign’s effect on health and the economy.

Members of the Helsinki Committee did raise concerns that the agreement with Pfizer could violate privacy rights, as information about the vaccination’s effectiveness is shared with the company.

“Many” were killed, injured and severely damaged by the vaccine, Anshei Emet said in the suit, adding that the Health Ministry “openly admitted that 41% of police persons, military, education and medical personnel who were vaccinated suffered severe side effects.” The Jerusalem Post was unable to verify whether the ministry did this.

There were “no full reports of the numbers of dead or injured,” despite the data from the clinical trials being released and the Health Ministry releasing reports on side effects experienced by those who received the vaccine, the suit said.

Despite the suit’s claims of severe side effects, death and injuries allegedly related to the vaccine, Health Ministry data released amid the vaccination campaign showed that only about 0.25% of Israelis who received the vaccination experienced any side effects, and that the vast majority of these reported side effects were light and temporary, including general weakness and headaches, dizziness, feeling faint, muscle pain, fever, joint pain, nausea, stomach pain, chills, throat pain, coughs and runny noses.

During clinical trials of the Pfizer vaccine, two participants died after receiving the vaccination, but the deaths were deemed to be unrelated to the vaccine by the US Food and Drug Administration.

Meanwhile, the vaccine has been found to be 97% effective against severe cases of the virus and 94% effective against asymptomatic infections, according to data recently released by Pfizer and the Health Ministry. Those who did not receive the vaccine were found to be 44 times more likely to develop a symptomatic case of COVID-19 and 29 times more likely to succumb to the virus when compared to individuals who had received their second dose two weeks prior.

Companies and associations that threatened to prevent unvaccinated employees from arriving at work were acting against the Nuremberg Code, the suit said, and policies preventing unvaccinated people from receiving certain services and entering certain locations were against the code. The vaccination policies go against Israeli state law as well, it said.

Anshei Emet called on the ICC to halt Israel’s administration of coronavirus vaccinations and to stop its policies incentivizing vaccinations.

The Nuremberg Code, published originally in the judgment of an American military tribunal in 1947 against Nazi doctors, laid out guidelines for medical experimentation, including the requirement for consent and the need to avoid suffering and unnecessary risk. While the exact code was never adopted in any official policy, it has served as the basis for medical-ethics policy in a number of countries.

Israel has never recognized or accepted the authority of the International Criminal Court — for the simple reason that they do not want to have to defend themselves against inevitable charges of genocide for their ongoing program of ethnic cleansing of the Palestinians.

For that reason alone, this lawsuit can’t really go anywhere.

But as we’ve previously reported, of all the people in the world, Jews in Israel — given their legendary experience of “torture” at the hands of “evil” Nazi doctors — would be the last people on earth to volunteer as guinea pigs in this worldwide medical experiment known as the “coronavirus pandemic”.

In fact, an early survey prior to the vaccine roll out showed that up to 75% of Israelis did not intend to take the vaccine

And when Albert Bourla, the Jewish CEO of Pfizer — the manufacturer of the COVID “vaccine” used in Israel — won’t even take his own vaccine, the average Israel would be foolish not to raise a collective eyebrow.

Bourla’s lame excuse is that he allegedly “doesn’t want to cut in line” — but Bibi Netanyahu and other Israeli leaders cut the line — to convince the skeptical Israeli public that the vaccines were “safe” — and there’s no reason why Bourla shouldn’t do the same.

The data that the Israeli Health Ministry has released claims side effect rates that are so low compared to other countries that it’s hard to believe they are actually using the same vaccine — and that the vaccine is so “safe” that it could very well be a placebo.

Netanyahu isn’t a fool — and it’s highly unlikely that he would submit the Jews in Israel to dangerous and untested vaccines that are far more threatening to the long-term existence of Israel than any alleged nuclear weapons in Iran.

The Israeli government has done a masterful job at virtually silencing and ignoring any opposition to the vaccine — but there are groups within Israel — such as Israeli News Live — which openly discuss the vaccine program as genocide and a potential “Holocaust”.

Whether the vaccine is a placebo or not is irrelevant to those opposing it — mandatory vaccination of healthy people is a complete violation of every international law on medical experimentation — and a violation of common sense.