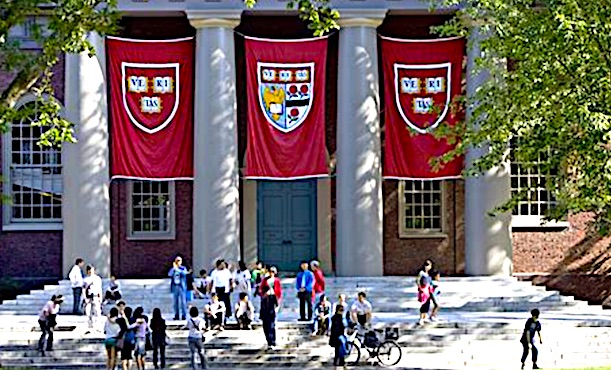 A group of undergraduate students at Harvard University has formed what they call an “anti-Zionist Jewish organization” that supports the ADL-certified ‘antisemitic’ Boycott, Divestment and Sanctions (BDS) movement against Israel:

The Harvard Jewish Coalition for Peace introduced itself in a public statement posted Monday on Facebook as “a new organization founded in the idea that Jewish liberation is inextricably bound up with the liberation of all people.”

The group said it will focus on Palestinian solidarity work; fighting anti-Semitism and for the safety of Jews and all people through solidarity; and creating Jewish spaces and events outside of Hillel.

“We build on a long history of Jewish anti-Zionism which teaches us that Jewish safety or liberation will never come at the expense of other people’s lives and land, and are committed to following the leadership of Palestinians in supporting the Palestinian-led Boycott, Divestment, and Sanctions (BDS) movement on and off Harvard’s campus,” the group said.

Jewish Voice for Peace, a pro-Palestinian group that backs the BDS movement, has a number of chapters on campuses across the country that push the boycott movement.

The Harvard coalition grew out of discussions about the need for an organized anti-Zionist organization following the spring 2019 Israeli Apartheid Week organized by the Palestine Solidarity Committee at the Boston-area school.

Hillel does not allow partnership with groups that support BDS or oppose Israel’s existence as a Jewish and democratic state.

“We do not claim to represent the majority of the Jewish community here at Harvard,” the statement said, “but we hope that our group can provide a space for those who resonate with this vision.”

According to the ‘official’ definition of antisemitism promoted by the International Holocaust Remembrance Alliance (IHRA), the Anti-Defamation League, and the U.S. State Department, this new jewish group’s agenda is textbook antisemitism or “Jew hate“.

And yet they are not, for some mysterious reason, being denounced as virulent ‘antisemites’ or even ‘self-hating’ Jews.

Perhaps what we have here is a case of controlled opposition, per Vladimir Lenin’s suggestion, “The best way to control the opposition is to lead it ourselves.”

If the Jews can figure out a way of infiltrating and leading the White Nationalist and Alt-Right movements, it would only make sense that they would also do the same with the troublesome BDS movements on America’s college campuses.

Jews have always advocated the ‘liberation’ of all ‘oppressed’ people as a strategy of self-liberation and self-protection.  The tight wire act here, though, is tricky: promoting ‘liberation’ of the Palestinians while not inciting antisemitism.

When is antisemitism not antisemitism?  Whenever it’s convenient for Jews to look the other way.