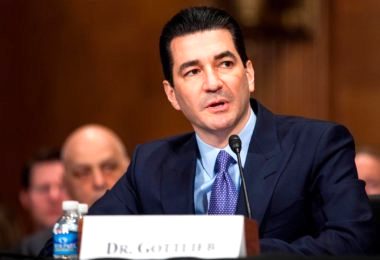 With what can only be described as chutzpah, Scott Gottlieb, the current head of the FDA, has rubber stamped the approval of a new opioid, Dsuvia, that is 10 times stronger than fentanyl and 1000 stronger than conventional morphine:

FDA commissioner Scott Gottlieb commented on the decision in a November 2, 2018, written statement:

“There are very tight restrictions being placed on the distribution and use of this product. We’ve learned much from the harmful impact that other oral opioid products can have in the context of the opioid crisis. We’ve applied those hard lessons as part of the steps we’re taking to address safety concerns for Dsuvia.”

Critics, however, say Dsuvia is completely unnecessary, and that its potency renders it a target for misuse and/or illegal sale — two key problems that currently plague most narcotic pain relievers.

Angelo Valente, executive director of the Partnership for a Drug-Free New Jersey, told a local news station, “There’s no question that we are extremely concerned that a drug of that kind of magnitude can wind up in the wrong hands … we don’t understand why this particular type of drug is even necessary.”

Don Parker, president of the Carrier Clinic, a New Jersey-based addiction treatment facility, also predicts trouble. “We think there will be a frenzy for this because it promises a much stronger high,” he says.

He also notes that since Dsuvia is a synthetic opioid, it won’t be long before producers of illicit drugs have deconstructed it and are able to reproduce it, and due to its extreme potency and therefore tiny size, tablets can be easily transported and distributed.

The potency of the drug also makes it resistant to naloxone, used to reverse opioid overdoses. Several doses typically need to be administered in case of a fentanyl overdose, and many still die. A Dsuvia overdose, being 100 times more potent than fentanyl, may prove impossible to reverse.

Dr. Sidney Wolfe, senior adviser to Public Citizen’s Health Research Group, also expressed concerns, saying: “It is certain that Dsuvia will worsen the opioid epidemic and kill people needlessly. It will be taken by medical personnel and others for whom it has not been prescribed. And many of those will overdose and die.”

The maker of Dsuvia, AcelRx Pharmaceuticals, dismisses such critique, saying the drug is for acute pain use in a medical setting only, and will not be dispensed through pharmacies. For this reason, “It will not contribute to the large outpatient opioid crisis,” Dr. Pamela Palmer, cofounder of AcelRx, says.

Jews dominate the pharmaceutical industrial complex, as we already know.  The Sackler Family is single-handedly responsible for flooding America with opiods that have left millions addicted and dead.  In the old days, Jews controlled the alcohol trade, and would use cheap alcohol to keep the goyim drunk and indebted to them, but they are clearly upping their game by getting America hooked on their drugs — over 40% of Americans are taking some kind of prescription medication every year, and a huge number of those are children, setting them up for a lifetime of drug dependence.

A quick read of the jewish FDA chief’s resume shows his deep ties to the pharmaceutical industry, and that alone should disqualify him from approving any drug whatsoever, but there are more “conflicts of interest” in Washington D.C. than there are UFO sightings at Area 51.  What’s important is the goyim stay sedated while the Jews continue their takeover of the country and make a tidy profit while doing it.  Regardless of the “restrictions” on the use of Dsuvia, it will be on the streets of America in no time at all, just like fentanyl was — just as it was intended all along.