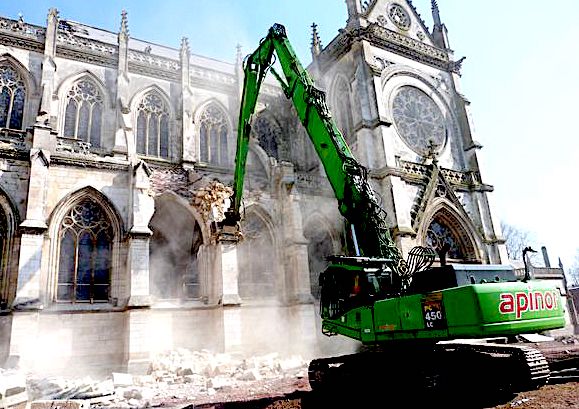 Jews appear to be gloating as France’s historic churches are vandalized, burned down, sold off and turned into mosques, gyms, lingerie shops, restaurants, and boutique hotels, all overseen by Stéphane Bern, a Jewish homosexual appointed by President Macron:

A traveller to Eastern Europe can visit the sites of once-famous yeshivas like Slobodka, Kelm, Volozhin Telze and Ponevech and mourn at seeing buildings that once echoed with Talmudic study and which are now either empty ruins or have been transformed into community centers or shops.

Those yeshivas, however, abandoned because of the Holocaust and prior periods of persecution, and the shuls burned to the ground by Nazis and their cohorts, have been reborn in Israel (and the USA). Today, the sound of Torah echoes from thousands of voices, more than there ever were in the renowned European yeshivas.

One cannot say the same about what is happening to Christianity in Europe, with France at the head. The worshipers are no more, and now it is the turn of the buildings.

“Should we abandon the churches of our villages, victims of de-Christianization?”, asks Stéphane Bern, commissioned by Emmanuel Macron to protect French cultural heritage, in a new essay for La Reveue des deux mondes.

On its website, the Patrice Besse real estate agency, which specializes in historic buildings, lists thirty churches currently for sale. Per square meter, desecrated churches are the cheapest lots in the country.

Since 2000, fifty churches have not had the luck of Santa Rita and have been destroyed. As in Finistère, the Notre-Dame de Gwel-Mor chapel in Morgat, of which not even the stained glass windows have been saved. The Goélands chapel in Saint-Jean-de-Monts was razed to the ground to make it a residential complex.

Meanwhile, for the first time in its history, no cardinal in office will sit in France, now that Archbishops emeritus Vingt-Trois (Paris), Barbarin (Lyon) and Ricard (Bordeaux) have joined the cohort of retirees.

“Should we perhaps remember that the chairs of Rouen, Toulouse, Lille or Rennes, fifty years ago, were occupied by cardinals?”, wrote Hadrein Desuin in Causeur.

In Rouen, where Father Jacques Hamel was killed by two Islamic fundamentalists a year ago during the morning mass, the conversion of four churches is underway, two of which suffered damage during the French Revolution: Saint-Pierre-du-Chatel, bombed in 1944, will become La Métropolitaine, a luxury restaurant and hotel rooms; Sainte-Croix-des-Pelletiers will welcome the Bekmiettes café, while the Saint-Nicaise church, classified as a historical monument, will become the Ragnar brewery.

Le Monde: “Five churches transformed into hotels – to sleep like a Pope”.

Marcel Proust, the greatest French writer of the XX century, already realized what was at stake in 1904, when he wrote in Le Figaro: “Suppose for a moment that Catholicism had been dead for centuries, that the traditions of its worship had been lost. Only the unspeaking and forlorn cathedrals remain; they have become unintelligible yet remain admirable”.

We don’t suppose anymore, now we know it. We know that another religion’s minarets rise in the French skies.

The idea that the culture of France can be separated from its Christian heritage is preposterous — they are one and the same.

The Papacy was had its headquarters in Avignon at one time.

And when France loses its Christian identity, it loses its culture.

France, under Napoleon, was the first European nation to make the disastrous decision to emancipate its Jews — and they repaid the magnanimous and ‘enlightened’ French people by fomenting a bloody revolution whose purpose was to replace the historic French nobility with the Rothschild banking dynasty as de facto rulers.

The so-called “French” Revolution was, in actuality, the first Bolshevik Revolution in Europe — the first domino to fall in the Judeo-Illuminati scheme to Judaize Europe — a process that is virtually complete in 2020.

And so it’s only fitting that France would appoint Stephane Bern, a Jewish homosexual and celebrity judge on a kitschy Eurovision talent show, whose family — from the shtels of Poland — has no historical ties to France — to “defend” its cultural heritage.

This same Jew was inexplicably awarded an O.B.E. by Queen Elizabeth for his “cultural contributions” to the British Empire, which apparently includes his biography of actress Grace Kelly and his book on the lives of the dogs of the European nobility.