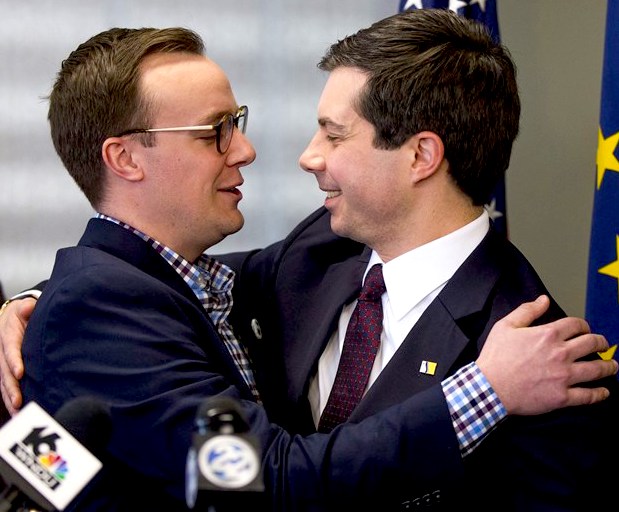 Jacob Bacharach, a jewish author and sodomite, has attacked and mocked presidential candidate and fellow sodomite Pete Buttigieg for not being ‘gay enough’ to be America’s first un-closeted homosexual President:

In his essay, “Why Pete Buttigieg Is Bad For Gays,” Bacharach bemoaned Buttigieg for being the avatar of what is presently considered societally acceptable from the homosexual community.

“There is a certain kind of gay guy. He is very likely white. He would say that he is in his “mid-thirties,” although he is much closer to the end than to the beginning of his last credibly young decade,” Bacharach wrote.

…Bacharach resents “Mayor Pete” as he calls him for peddling the “type of unthreatening, socially acceptable, vaguely conservative gay identity” that he feels holds the LGBT movement back.

“I have increasingly come to believe that, though perhaps not intentionally, they do so to the detriment of many other gay folk and queer folk and trans folk and folks who just do not — when you put yourself in the mind of a voter with an NPR mug and maybe even an equality sticker on the back of the Volvo — quite look the part,” Bacharach wrote.

With transgenders and gay people throughout the world undergoing so much real and imagined hardship, Bacharach is “suspicious of the neat schema of [Buttigieg’s] biographical tale.”

“The struggles of trans people, queer people of color, LGBTQ people who are rural, LGBTQ people who are poor, belie this neat onward-and-upward narrative, which is a story about a very particular kind of scrubbed, upwardly mobile, largely white, well-dressed, unutterably corny gay,” Bacharach wrote.

Jews have a well-deserved reputation for never being satisfied with anything, even when it’s something they’ve been working tirelessly for.  Harry Truman, who survived an assassination attempt at the hands of disgruntled Jews who felt he wasn’t moving fast enough to recognize their new nation of Israel, once observed that it was impossible to satisfy them not matter what you did for them.  So now that the jewish-dominated LGBT “movement” has their first “viable” candidate for President, they attack him for basically not being flamboyant and degenerate enough.

But this is how the Left always subverts and undermines itself.  Liberalism is based solely on identity politics, and since there are an infinite variety of conflicting “identities”, none of them can ever agree on anything except the one bond that somewhat holds them together: their common hatred of White people, especially Christians, whose insistence on a moral basis of society is in itself “morally repugnant” to the Left.  Perhaps if Buttigieg were HIV positive, he’d be deemed a more qualified President.  Which begs the question: what qualifies someone to be a “gay” president in the first place?