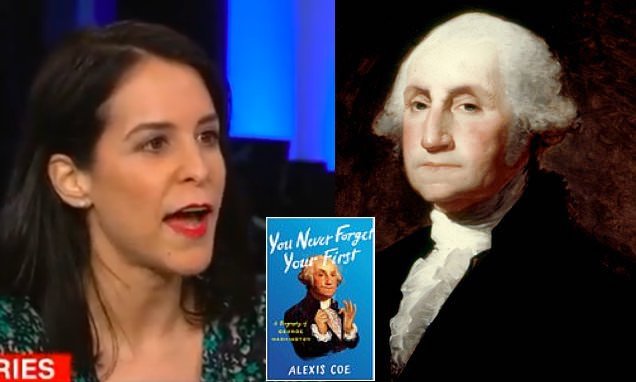 (Updated and republished for President’s Day)

(Inside Hook)  Alexis Coe, a pro-LGBT feminist ‘historian’ and, of course — grand daughter of a Holocaust survivor — which apparently gives her the moral “carte blanche” to trash White Christian culture — whose previous work of non-fiction attempted to draw a sympathetic portrait of a real-life insane, homicidal teenage lesbian — has followed that tour de force up with a new polemical hit piece on George Washington, masquerading as a legitimate biography:

“Our history has been told about men for men and by men,” says the historian Alexis Coe. “We’ve seen that when women and people of color start addressing what we consider basic history they find that we don’t know what we think we know.”

She demonstrates this deftly in her new biography of George Washington, in which she peels away at the myths surrounding the first President to reveal the many flaws of the man beneath. You Never Forget Your First is cheeky in tone, approachable and fun to read, and yet Coe is harsher on her subject than the small army of male historians who’ve written thousand-page tomes on the first president before her.

Coe doesn’t back away from the ugliest parts of humanity in her reconsideration of Washington. There are stark reminders on nearly every page of the book that Washington was a slave owner who was complicit in the genocide of Native Americans. “Historians all work in the same archives and we see the same material,” says Coe. “Why in previous Washington biographies do we hear that he was a slave master and we hear about the number of people he owned, but it’s all to serve this final beautiful moment in which he emancipates his slave? None of that is true.”

Coe is determined to share the details: that Washington once slapped a slave for not being able to singlehandedly move a tree. That he told his overseers not to beat slaves not out of the kindness of his heart, but because it behooved him to have his slaves in good physical condition. “The figurehead of American liberty was never far from a representation of its (and his own) deep-seated hypocrisy,” writes Coe in You Never Forget Your First…

The juxtaposition of great men and their evil deeds is relevant for how we talk about the Founding Fathers as a whole. Their intentions are invoked so often in modern discourse, but they’re portrayed as people who only did great things or only bad things because they didn’t know better, as if they were victims of the time they lived in. “If we understand that Washington was a man who sometimes did great things and sometimes did awful things and we have actual examples, he becomes a real person to us,” says Coe. “We’re happy that he did something at one moment and then we’re really mad at him at the next.” If we look at all of the Founding Fathers that way we’d have a good reminder that the men who created this country were not perfect.

[She] also delves into the quirkier side of male historians’ coverage of Washington, most notably in their weirdly sexualized descriptions of his strong thighs. Coe calls these men “thigh men” because they’re obsessed with Washington’s masculinity. “They talk about his thighs in highly sexual ways that seem inappropriate for a biographer. They’re really hot for him,” Coe points out. “So they would talk about size a lot and then they were talking about the size of his hands and you would think it was a joke but they’re being serious…”

Radical Jews like Coe have been furiously rewriting American history — under the guise of Critical Race Theory — so that it conforms to their anti-Christ, anti-White nation-wrecking globalist agenda — and the ‘problematic’ Founding Fathers are in their cross hairs.

It isn’t about making our white Founding Fathers “human”; rather it’s about tearing them down and destroying our ability to think that our ancestors did anything right — instead, they deserve our scorn for failing to live up to impossible Jewish standards of Marxism.

Many new school history books now teach (read ‘indoctrinate’) that the colonist’s fought the Revolutionary War so that they could institute legalized slavery — and “genocide” the Indians.

Nothing about wanting to break the financial stranglehold that the Rothschild’s Bank of England exerted on the economy of the colonies.

No, Americans just wanted the constitutional right to own, slap and rape their slaves — but again, no mention of the fact that the slave trade in America was dominated by wealthy Sephardic Jews like Aaron Lopez.

An agenda of revisionist Jewish “historians” like Coe is to portray America — not as the greatest Christian nation ever conceived in the history of the world — but rather as a evil cabal of White supremacists who got rich by first ethnically cleansing the continent and then building its ill-gotten empire on the backs of Black slaves, and oppressing every woman just for good measure.

School children will never be told that slavery was “universal” among the “native” Indian tribes in North America long before the White man ever showed up.

Another Jewish hobby horse that was universal among the “natives” was “genocide” — many tribes of Indians had literally been “wiped off the map” — every man, woman, and child — by other Indian tribe over internecine turf wars or any other random offenses and casus belli.

White children must never be taught about the politically-incorrect mountain of archeological evidence that the White man had explored and settled in North America at least as early as 1,000 BC, around the time of King Solomon.

And given the fact that early White settlers encountered blue-eyed Indians, it’s safe to say that their ancestors most like “absorbed” those early White explorers — or more likely, killed the men and kept any of the white women as concubines as battle plunder.

And children should never be told how “multiculturalism” and “diversity” is what led to the displacement of the racist and bigotted native Indians: