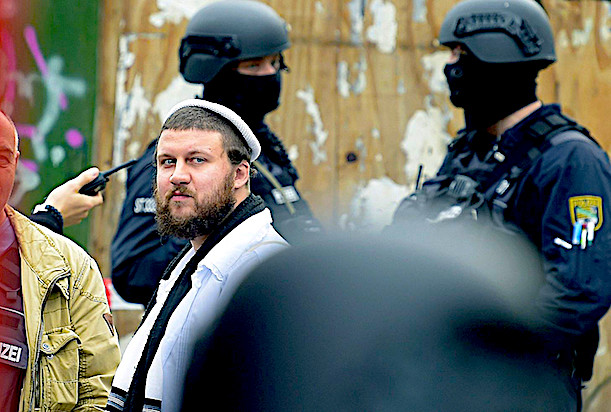 (Algemeiner) The small yet inordinately powerful Jewish community in Germany has pressured the German government to substantially increase funds by 22 million Euros earmarked for the security at all Jewish institutions and facilities in the country:

The move comes in the wake of the shooting attack on a synagogue in the central city of Halle last Yom Kippur, during which a neo-Nazi assailant attempted to breach the synagogue doors and massacre the congregants inside.

After being unable to force his way into the synagogue, the gunman randomly killed two passersby.

According to a statement from the Federal Ministry of the Interior, Building and Community, the German Federal Government and the Central Council of Jews in Germany — a representative body of the country’s Jewish community — signed an annex to a deal that stipulates a grant of 22 million euros to the Central Council for upgrading security at Jewish sites.

The minister of the Interior, Building and Community, Horst Lorenz Seehofer, said, “Jewish people must be able to live in safety and security in Germany. This is part of Germany’s national ethos.”

“The Jewish community can be sure that the Federal Government is doing everything possible to provide the needed protection,” he added. “We are aware of our responsibility.”

The president of the Central Council, Dr. Josef Schuster, commented, “The costs of providing security often place a considerable financial strain on our Jewish congregations. The attack in Halle, however, made it painfully clear that Jewish life requires serious and massive protection.”

“We greatly appreciate the Federal Government’s commitment,” he noted.

The ministry added in its official statement, “In signing the annex, the Federal Government underscores its commitment to resolutely opposing every form of antisemitism as an attack on our free and democratic basic order.”

“The Federal Government feels a special duty to the Jewish community and opposes all trends to forget or remain silent about the Nazi genocide of the Jews,” it declared.

So, in other words, the attack on the Halle synagogue failed because it already had adequate security to defend itself against random attacks — yet this failed attack is allegedly the rational to increase security.

Totally ignored is what may have motivated Stephan Balliet, the Halle attacker — he was incensed when he discovered that the much-ballyhooed Holocaust was actually fake — and that not only did the Jews lie about it, they passed laws that threw people in prison for exposing those lies.

And so when young Germans like Balliet who discover they’ve been lied to their entire lives by these racial aliens  — while their fellow Germans have been the true victims of a monstrous Jewish blood libel — they have no way of expressing their feelings of outrage and betrayal because Jews have made that discussion illegal.

If it were legal to discuss and debate the historical facts of the so-called Holocaust, it is quite possible that Stephan Balliet might never have become so frustrated that he felt his only recourse was to express that anger in an ill-advised and self-destructive act.

Jews have openly admitted that when they take measures to combat ‘antisemitism’ — such as making Holocaust denial illegal — they create even more antisemitism, as we saw in the synagogue attack in Halle.

Using your power to silence your critics accomplishes only one thing — resentment — and pent up resentment with no healthy and productive outlet will ultimately erupt into violence of one sort or another.

And no amount of state-funded security is going to adequately protect the Jews of Germany or America — or anywhere else — unless they start acknowledging their own role in the ever increasing resentment toward them.

The answer is in the mirror — not in the non-Jews whom they hate and consider “brute beasts” and cattle whose sole purpose for living is to serve Jews.

An attitude adjustment is in order — not more armed security.