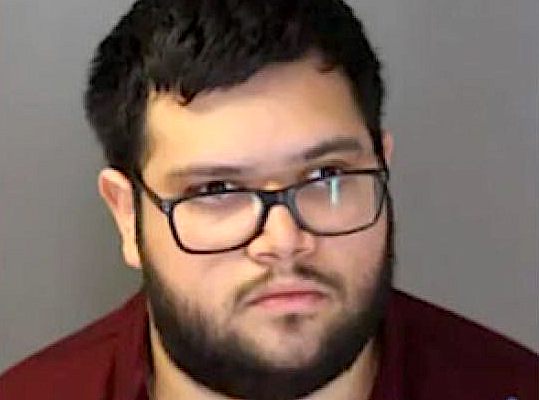 Police have arrested Sean Sammit, a jewish man who claimed he was attacked and stabbed as he left a synagogue in West Bloomfield, Michigan, after they found information on his Apple watch that proved he had made the whole event up:

Sammitt is a former employee at Temple Kol Ami on Walnut Lake Road. West Bloomfield police say Sammitt claimed a man shouted anti-Semitic comments then stabbed him as he left work. Sammitt told police he fought the attacker off and drove himself to Henry Ford hospital.

But police say his story didn’t add up, and a thorough search of the parking lot found no evidence. That’s when they analyzed Samitt’s Apple watch and looked at his heart rate when Samitt claimed the attack happened.

Investigators say it was normal and should have been higher. But the watch showed before the attack that Samitt’s heart rate was elevated.

That led police into the synagogue, where they say they found bloody tissues and a knife Samitt used to stab himself.

“We all have to think about the actions that we do and so these little imprints whether on his phone, his watch, or a camera, it just really shows every action we do isn’t going to go unnoticed,” said Rabbi Asher Lopatin.

Sammit is now charged with filing a false police report. Why he allegedly made up the attack is still unknown.

The reason Sammit made up this fake antisemitic attack should be obvious to police, but they would be accused of antisemitism if they revealed the real reason he did it.  Jews benefit collectively from every single ‘antisemitic’ attack, which is why the jewish press announces even the most trivial ‘attacks’ on Jews anywhere in the world.

Jews have incentivized ‘hate’, and Jews are richly rewarded when they can portray themselves as the perennial victims.

Billions of dollars continue to flow into jewish coffers because we allowed them to get away with the greatest hate crime hoax in history: the so-called ‘Holocaust’.

Once they got away with that, they quickly figured out how to monetize each and every ‘attack’ on a Jew, using these attacks to create fear in the hearts of their fellow Jews, who open their wallets and pour millions into jewish fear factories, like the ADL and SPLC.

Jews have been caught terrorizing their fellow Jews because it obviously makes them feel more jewish to live in fear.

One prominent jewish publisher recently admitted that antisemitism is ‘money in the bank‘ for Jews.  And until we pass new laws that severely punish those who make these false ‘hate crime’ reports — and a recent book proved that 70% of these reported hate crimes are hoaxes — Jews like Sammit will continue to fool the goyim and profit from fake hate.