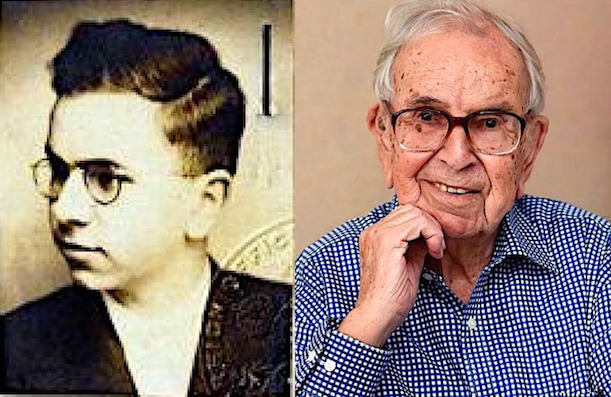 One might intuitively think a “Holocaust survivor” is a Jew who actually spent time in a German concentration camp, but apparently any Jew who emigrated from Germany even prior to World War II and managed to “survive” the war in a country that the Germans didn’t even occupy now qualifies as a sanctified “Holocaust survivor”:

As the May 8 anniversary of Nazi Germany’s defeat in World War II approaches, Henry Wuga spoke about his past to Scotland’s Daily Record in an interview published Sunday.

Wuga, who was born in Nuremburg, was still a teenager when he fled Nazi Germany on the “Kindertransport,” which evacuated children threatened by antisemitic persecution in the late 1930s, just before the war broke out.

“It’s such a very important date,” he said of VE Day. “At one point, when I came to the UK, we had all been interned on the Isle of Man so we were all behind barbed wire thinking that if the war was lost, the Nazis would come and get us. It was horrible.”

“People forget how much of a close-run thing the war was,” he noted.

Wuga managed to leave the internment camp and worked as a chef in Glasgow. When the news of the defeat came, “We didn’t go to the big celebrations in George Square — we just had a quiet celebration at home with [my wife] Ingrid and her parents after we heard about it on the radio.”

“It was a bittersweet time as my mother was still hiding in Germany,” he said. “You can imagine what it meant to us that the war had ended.”

A month later, Wuga was told his mother had survived the war.

“We were so happy. The feeling was unbelievable,” he said. “It took two years to get permission to bring my mother to live with us in Glasgow.”

Wuga vividly remembers the rise of Nazism, especially because Nuremburg was a center of Nazi activity, including massive annual outdoor rallies.

“When Hitler came to power, you could feel the antisemitism everywhere,” he said. “There were only two other Jewish boys at school and they made us sit at the back of the class. It was terrible. At school, they would sing a song, ‘Two Jews in the water hollow, one Jew drowns, we hope one will follow.’”

“The atmosphere was horrible. We knew we couldn’t stay there,” he recounted.

Wuga succeeded in getting a place on the Kindertransport in 1939, and remembers, “When we got on the train to head for the Dutch border with all those young children, the noise was unforgettable. It was one huge howl from 150 children. I have never forgotten it.”

He later met his wife Ingrid, a fellow refugee, in Glasgow. They married in 1944 and now have two daughters and four grandsons.

The internment or transit camp on the Isle of Man was not, as this article sneakily attempts to suggest by mentioning the dreaded “barbed wire”, anything sinister, despite recent attempts by Jewish “historians” to make it seem far worse than it actually was.

And despite the fact that Wuga was already 19 years old, a legal adult, he somehow managed to get on a train (Kindertransport) meant to transport actual children out of Germany.

And why wasn’t Wuga conscripted into the British army like other young men his age to fight the Germans on the killing fields of Europe?  Need we ask?

And how did his mother survive the war living the entire time in Germany without, apparently, being sent to a concentration camp and gassed and cremated?  No explanation given.

How does passing the entire war in peaceful Glasgow working as a chef qualify you as a “Holocaust survivor”?

Jews were encouraged to emigrate from Germany in the 1930s, and most of them did.  And most of those who emigrated somehow “managed” to get to a country, like Scotland, that didn’t require them to enlist in the army and actually fight in the war.

Can the bar to qualify as a “Holocaust survivor” be lowered any further?

How do you trivialize a “Holocaust” that never happened?

Henry Wuga and his enablers have succeeded in doing just that.