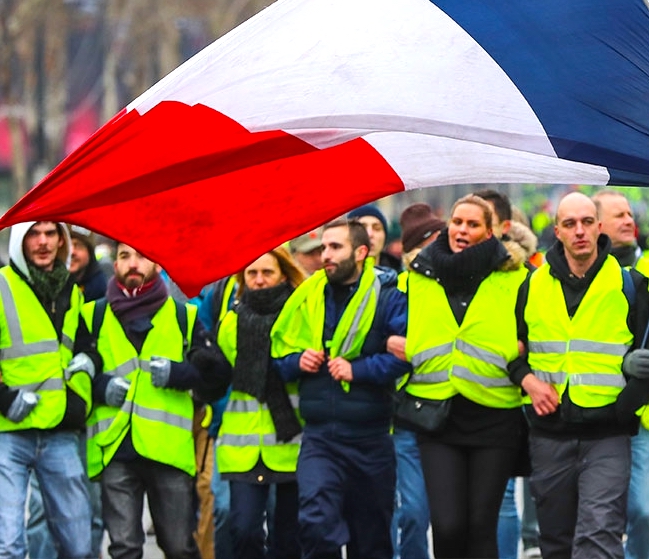 It has not escaped the attention of certain observers of the Yellow Vest protests in France that they have been  overwhelmingly White, despite all the efforts of the French government and jewish-controlled media to promote diversity in that country:

Despite suffering from high living costs and difficult access to benefits, minorities have been reluctant to join the yellow vest movement, with few seen in demonstrations.

Their absence noticed by newspapers and TV stations across France.

“It’s a white movement. The question of minorities and their specific concerns are not central to yellow vests,“ [said] Rafik Chekkat, law expert and editor of website Etat d’Exception.

“Banlieues are hesitant to join yellow vests” read a Le Monde article, referring to the the impoverished dwellings outside urban centres, which are overwhelmingly represented by minorities.

“There’s been an underrepresentation of immigrants, people from North Africa or the rest of Africa,” said Dominique Sopo, president of SOS Racisme, an anti-racism organisation.

With immigrants and minorities suffering from disproportionate rates of unemployment and poverty, similarities with yellow vests when it comes to pay and work are obvious.

Yet a study by sociologist Herve Le Bras suggested that yellow vest protesters are overwhelmingly from rural areas, where there are few people of colour.

“The question of minorities and their specific concerns are not central to yellow vests.”

The protests, which began late last year, have gathered momentum on issues of the erosion of people’s purchasing power, the widening of the wealth gap and a proposed tax on cars’ fuel consumption.

They are not focused on racism nor have they embraced minorities, said Chekkat.

“If you look at the [2017] presidential elections, racial questions were never discussed,” said Chekkat.

Because minorities were left out of politics, they have not been accommodated space in demonstrations either, said Chekkat.

“There’s nothing new in the fact that people of colour stay out of protests.”

Another deterrent is how the media describes minorities, specifically in how they come from the banlieues, Chekkat said.

The term is at times meant pejoratively and brings back memories of the 2005 uprising, when young people in these neighbourhoods burned cars to protest police brutality and inequality under then President Nicolas Sarkozy – who in return described them as “racaille”, or scum.

“There’s something almost racist in using that term (banlieues) to talk about race, as if people of colour were one homogenous group,” said Chekkat.

Banlieues were, in other cases, accused of starting the yellow vest movement; minorities are seen as troublemakers, rioters and thugs, said Chekkat.

…The yellow vest movement, meanwhile, has witnessed outbursts of racism.

In one instance, white yellow vest protesters forced a black woman out of her car and insulted her in front of her children, telling her to “go back to [her] country.”

Minorities have been reluctant to join a movement that might very well turn against them, said Sopo.

“When you’re of foreign descent, you know that populism can easily turn against you,” he said. “A movement with anger at its roots can easily turn it on migrants and their kids.”

Social unrest and protesting is encouraged only as long as those protesting are promoting the jewish racial agenda, so when it comes to their attention that the protests are overwhelmingly White and represent White interests and White concerns, the jewish media goes into attack mode, insinuating that there is some kind of evil intent on the part of the White protesters to intimidate and “marginalize” people of color.  If anything, these protests demonstrate that there is no cohesive French nation and that despite all the diversity propaganda, what is important to Whites is entirely different from what concerns non-White immigrants.

And if protests don’t involve wanton violence and destruction of property, many non-Whites lose interest.  And as with the case of Black Lives Matter, if the protests don’t result in potential big paydays for race-hustling jewish lawyers and their knuckle-dragging victim/clients, again, they couldn’t be bothered.  But on top of all that, just as with the Jews of France, there is always that fear in the back of their minds that theses largely peaceful protests could turn against them — if Whites ever wake up to the true source of their problems.