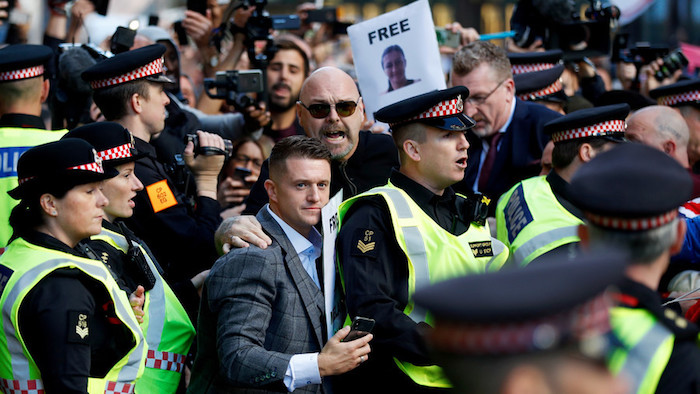 The pro-Israel activist Tommy Robinson continued his kosher “anti-Muslim” attacks, going so far as to claim that he doesn’t care if he incites islamophobia:

Tommy Robinson said he doesn’t care if he “incites fear” against Muslims as long as he stops “children from getting raped,” in a heated interview with Sky News.

Speaking to the broadcaster following a court’s decision to adjourn the retrial of Robinson – real name: Stephen Christopher Yaxley-Lennon – on contempt of court charges, Robinson was questioned on why he doesn’t campaign against white pedophiles. He said: “To be honest with you, I don’t care if it incites fear [against Muslims] as long as it educates the children and prevents them from being raped.”

Speaking to Sky News’ Jason Farrell, Robinson stated: “If I believe I’m morally right then I’m not bothered about what your law says.”

The far-right activist was convicted of contempt of court last year after he recorded suspects in a sexual grooming case in Canterbury.

The four defendants were convicted, but the judge slammed Robinson’s actions: “It is about justice and ensuring that a trial can be carried out justly and fairly. It’s about being innocent until proven guilty.”

On his filming of defendants’ faces, Robinson said that to be “forewarned is to be forearmed,” adding: “All I wanted to do was get a video of their faces and I want every single child and parent who lives in that vicinity to know what those men were alleged to have done.

The judge let down the British public. Those men should have been in a prison cell.”

Robinson was later arrested after filming defendants outside a Leeds court, bringing separate contempt of court charges against him. The activist admitted in the interview to being ignorant of the law and subsequently receiving legal training.

He was released from prison in August after judges quashed a finding made at Leeds Crown Court earlier in the summer, granting him a conditional bail from a 13-month jail sentence. The interview was the first broadcasted since his release.

Ahead of the interview, Robinson sent recordings to his supporters outlining his expectations of the upcoming interview, suspecting they would drag up controversies from “ten years ago,” including his joining of the British National Party.

Farrell put it to Robinson that he himself has a “radicalized” view of Islam in line with Islamic fundamentalists, a claim the activist denied, arguing that the radical interpretation of Islam is widespread among Muslims.

The only way to get rid of Muslim rape gangs is to get rid of all Muslims, and that’s never going to happen, so what exactly is Tommy Robinson accomplishing?  Robinson’s role is to move the political Right in Britain further to the Left, by portraying the “far Right” as being “anti-immigrant” but pro-Israel and “anti-racist” all at the same time.  This will never work because it will collapse under its own internal contradictions.

Perhaps to working class Whites in England, Robinson is some kind of folk hero, but in reality he’s only misleading and misdirecting these people down a blind alley.  Robinson cannot serve both jewish and British interests at the same time, as they are diametrically opposed — and attempting to do so will ultimately accomplish nothing but generate more fake headlines in jewish media outlets.