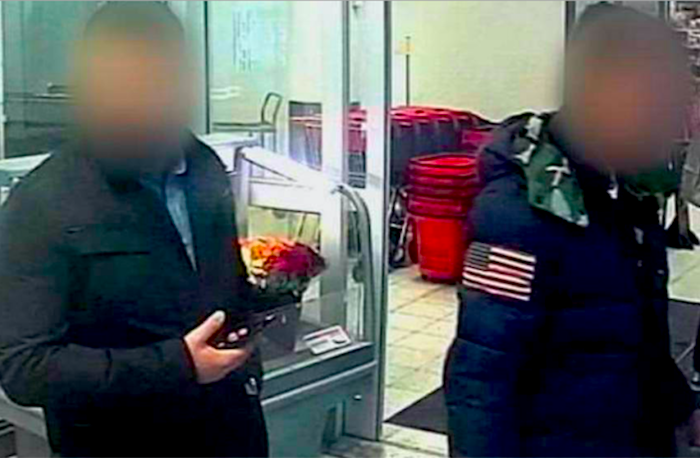 The Swedish media giant, SVT, which is controlled by the jewish Bonnier family, is refusing to help police identify Muslim migrants who have been preying on the elderly with bank card thefts, claiming that it isn’t in the public interest to help with their arrest:

Two migrants recently stole a 90-year-old woman’s credit card and then managed to withdraw €1,900 from it.

The police published images of the perpetrators and asked the public to help identify the men. The images were completely uncensored and the men’s faces were clearly visible.

According to the police, about 10 similar cases have occurred in different regions of the country. The approach is the same – the robbers target elderly people.

“If you recognize the people in the video, contact the police at 114 14”, polisen.se explicitly writes on their website.

And what does Swedish state TV (SVT) do when they write about the police alert? They pixelate and censor the images and refuse to help the police.

SVT writes in their article that it would be unethical, and a violation of their “code of ethics” to publish images of people who are not convicted, even if the image is already on the police’s website.

Furthermore, SVT claims that they do not want to be “an active part” of the search, and do not consider the robberies to have “a large public interest” because the perpetrators are not considered “to constitute a direct and blatant danger”.

In other words, tax-funded SVT chooses not to use its large media platform, which is funded by Swedish taxpayers, to help the police and the 90-year-old woman find the perpetrators.

“They are wanted by the police for having attacked elderly people in a reckless way. But SVT still chooses not to show their faces.”

“When you see things like this, you have to wonder whether SVT is on the victims’, or the criminals’ side. This is completely incomprehensible. It is so embarrassing that I can’t find words. My God,” he writes.

Jews have become experts at thwarting the police worldwide from being able to do their jobs properly.  They have literally made it a “hate crime” for the police to arrest anyone who is a non-White minority.  They have somehow convinced the White public that to reveal the race of the criminals would not be “in the public interest,” because connecting crime with the race of the perpetrators is “racist” and counter-revolutionary.  For the radical, nation-wrecking agenda to progress, race must disappear from our consciousness.

The jewish Bonniers of Sweden seem to have an undeclared war against the elderly ethnic Swedes, first prosecuting them for saying negative things about migrants online, and now refusing to help arrest migrants who are targeting the elderly in their criminal activities.  What is remarkable is how the Swedes tolerate this kind of persecution from the Jews in positions of power.  If the Swedes dare stand up to these nation wreckers, they are smeared as “neo-nazis” and “xenophobes”.  And if all it takes to make them back down is some juvenile name calling, then Sweden’s hope for survival is rather dim to say the least.