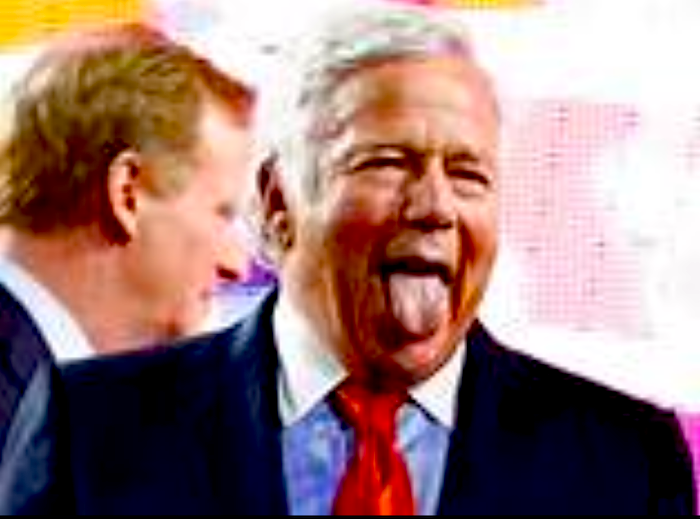 Robert Kraft, owner of Super Bowl champions The New England Patriots and a recipient of the so-called Jewish Nobel Prize, is going to be facing charges for soliciting asian prostitutes in Jupiter, Florida where he has a home:

The New England Patriots owner, who with a net worth of $6.6 billion is the 79th richest American, according to Forbes, is a generous giver to Jewish causes. The 77-year-old businessman is close to Netanyahu, having attended the prime minister’s 2015 speech to a joint session of Congress about his opposition to a nuclear deal with Iran. Kraft is close, too, with President Donald Trump, who in turn has forged a strong working relationship with Netanyahu…

The Genesis Prize Foundation said at the time that Kraft was given the award for having “spoken out publicly and donated generously to organizations combating prejudices, including anti-Semitism and the de-legitimization of the State of Israel,” and that he would be giving the money to initiatives fighting anti-Semitism, prejudice and attempts to delegitimize Israel.

But things again didn’t go as the foundation wished. On Friday came news that Kraft is being charged with soliciting a prostitute in Florida, one of about 100 men charged in a human trafficking investigation in Martin County. The charges concern visits by Kraft to the Orchids of Asia Day Spa in the city of Jupiter, near where he keeps a home. Jupiter Police Chief Daniel Kerr told WPTV that there is video evidence of all the men who are being charged.

A spokesperson for Kraft denied the allegations.

“We categorically deny that Mr. Kraft engaged in any illegal activity. Because it is a judicial matter, we will not be commenting further,” the representative said in a statement issued to media outlets.

It was not immediately clear what would happen to this year’s award or the prize ceremony, which is scheduled for June. The investigation involves a number of massage parlors in Florida that, according to law enforcement, were used for prostitution and human trafficking. Although Kerr said there is video evidence of Kraft patronizing a massage parlor on two occasions, the legal machinery could grind on for months.

If the so-called #MeeToo Movement taught us anything, it proved that the vast majority of men accused of inappropriate sexual behavior toward women were Jews, and even Hollywood bigwig, Larry David admitted this to be the case during his appearance on Saturday Night Live.

But when Larry David points his fingers at jewish predators, it’s “funny” — when we do it, we are deranged antisemites who want to gas “another” six million Jews.

Jews have promoted every kind of sexual “freedom” that comes into their perverted heads, and they have tried to convince us that society is much “healthier” when we don’t “repress” our desires.

They are the ones who told us that pornography was protected under our “freedom of speech” — including gay pornography.

They were the ones who told us that abortion was protected under our “rights of privacy”.

But as a jewish billionaire, Bob Kraft need not worry about his losing his “freedom” over the “misunderstanding” that occurred at this Asian “day spa” where a “happy ending” is guaranteed for all — charges will be dropped, as if it were ever in any doubt.