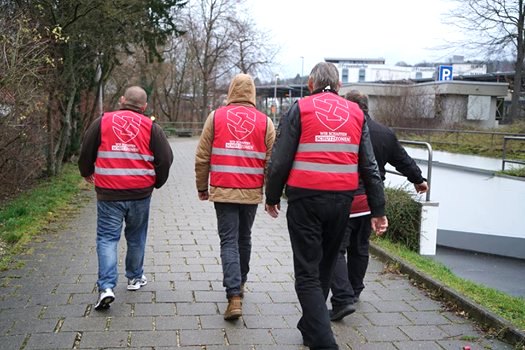 While brave private German citizens have taken to the streets to help defend their women against roving migrant Muslim and African rape gangs, the jewish press is attacking them and defending the “rights” of the rapists:

The mayor of Amberg, Michael Cerny, said he was “shocked” after the neo-Nazi linked NPD party posted photos online of four people wearing red protective vests to create “safe spaces,” including outside a refugee center.

“I can understand the insecurity seen in some of the reactions of some Ambergers, but the hatred and the threats of violence from all over the country go way too far,” Cerny told the local daily Mittelbayerische Zeitung.

The case revived a simmering debate over immigration, integration and crime that has flared since the mass influx of over one million asylum seekers from 2015.

Interior Minister Horst Seehofer — head of Bavaria state’s CSU party, who has been highly critical of Chancelor Angela Merkel’s liberal stance on immigration — called for speedy expulsions of immigrants who break the law.

The CSU’s parliamentary leader, Alexander Dobrindt, said he “sharply condemns” the original street violence as well as the fact that “certain extremist groups” were seeking to instrumentalize the attacks.

A spokeswoman for Merkel had Wednesday condemned the assaults in Amberg as well as a xenophobic attack by a 50-year-old unemployed German who steered his car into groups of immigrants on New Year’s Eve.

One of those attacks, in the city of Bottrop, left eight people injured, including a four-year-old Afghan boy and a 10-year-old Syrian girl.

The Jews have successfully undermined the rule of law in Germany to the point that the police are afraid to arrest migrants for fear of being investigated for “racism” or “racial profiling.”  This paralysis of law enforcement has emboldened Arab and African migrants who now walk the streets of Germany with a sense of entitlement and invincibility.  And this has put all German women at risk, fearful of walking the streets alone even during the daytime.  Rape has become commonplace in Germany.

While Blacks in America are encouraged to patrol their own neighborhoods to deter Black crime, when Germans do it in their own towns and cities, they are smeared by the “lugenpresse” as violent Neo-Nazi vigilantes who are motivated only by racism.  This unjust criticism by the Jews is intolerable, and the Germans need to take a stand against their oppressors and refuse to be cowered any longer by these empty epithets that have been used so much that they no longer should have any sting or credibility.  If the Germans won’t defend their own women, they do not deserve to survive as a race.