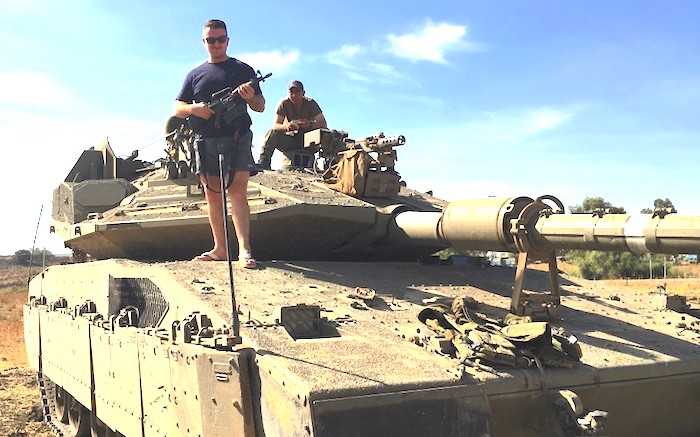 The Middle East Forum (MEF), a radically pro-Israel think tank with ties to the war mongering jewish Neo Cons in Washington, D.C., has admitted to paying for the legal defense of British “nationalist” Tommy Robinson:

Robinson was jailed for 13 months in May, “after being given 10 months for contempt of court, which he admitted, and a further three months for breaching a previous suspended sentence”.

MEF said it is “helping Robinson in his moment of danger”, in “three main ways”: using “monies to fund his legal defence”; “bringing foreign pressure on the UK government to ensure Mr. Robinson’s safety and eventual release”; and “organising and funding” the 9 June rally in London.

According to MEF, the organisation is also “sponsoring and organizing the second ‘Free Tommy Robinson’ gathering in London on July 14”.

The statement was signed by MEF Director Gregg Roman, who has previously “worked in Israel’s Defence and Foreign Ministries”. MEF President Daniel Pipes, meanwhile, has been described by the Southern Poverty Law Centre as an “anti-Muslim activist”.

Jews in England have always been against any British nationalist parties — and have done everything they can to undermine them, including passing “hate crime” laws that put White people in prison for defending their country against non-White invaders.

So now we have confirmation of what we already have reported — that powerful Jews are promoting, defending, and financing Tommy Robinson — and the reason is quite simple — Robinson is on record as “hating” White Nationalists, while at the same time being vocal and hypocritical supporter of the apartheid State of Israel.

Powerful, nation-wrecking Jews know that their anti-White policies are going to create a natural rise of White Nationalism, so they want to make sure that any White Nationalist groups that do form stay away from any “antisemitic” conspiracy theories that point to the Jews as the true architects behind the non-White invasion of Europe.

That’s what Tommy Robinson is being “hired” to do — praise Israel and the Jews, and demonize “racist” Whites who believe that British people actually have a right to have their own country.

In Merry Olde England, Robinson would have been drawn and quartered for treason, but today he is celebrated and idolized as a “martyr” who fights against the “islamification” of the U.K.