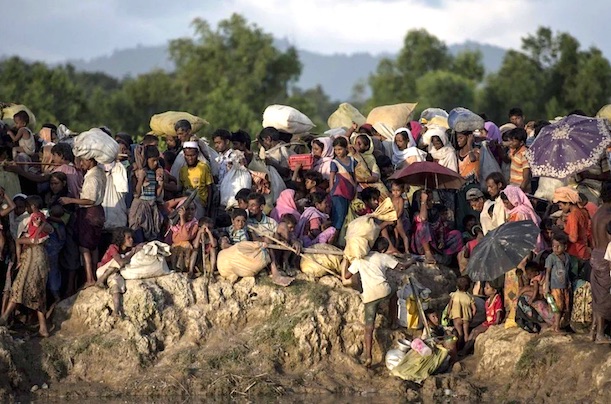 [This article is a repost from 2018 — and more relevant than ever.  Includes updated links.]

(Washington Times) Scott Solomon, a jewish professor in one of the “soft” sciences — Sociology — now claims that there will be a huge “benefit” to global warming: the end of racism through race mixing:

Scott Solomon, Rice University ecology, evolution and scientific communication professor, argued in a recent article that climate change is expected to cause mass migrations, which would increase the number of interracial couples and multiracial children.

“The bottom line? As people around the world become more physically similar to one another, it’s possible that racism might slowly fade,” Mr. Solomon said in a Sept. 7 article for MACH.

That scenario was predicated upon forecasts of mass migrations sending millions of “climate refugees” away from the coasts and warmer climates.

In a March report, the World Bank warned that climate change could compel as many as 140 million people to migrate by 2050, primarily from sub-Saharan Africa, South Asia and Latin America, although the study predicted such migrations would take place primarily within their countries’ borders.

The result could be an increase in “gene flow, a type of evolution caused by the blending of genes between populations,” Mr. Solomon said.

“Because skin color is controlled by many genes, parents whose skin color differs tend to have children with intermediate skin tones,” he said. “And so in five to 10 generations (125 to 250 years), we may see fewer people with dark skin or pale skin and more with a brown or olive complexion. Having both dark skin and light eyes may become more common.”

He pointed to a 2017 Pew report that found U.S. interracial births rose from 1 percent in 1970 to 10 percent in 2013, and that “the multiracial population is projected to grow by 174 percent over the next four decades.”

Judging by all the inter-racial couples in virtually every advertisement on television and pop-up ads on the internet, it’s hard not to conclude the Jews who own and control the media have a vested interest in promoting race mixing as a healthy, normal thing to do.

After all, every Jew is already race mixed — and look how happy and successful they are.

But then again, if you look at the world’s most highly race mixed countries — like India, Brazil, or Mexico — you’ll see the lightest skinned people at the top.

The same is true in Jewry — the whitest looking Jews — the Ashkenazi — are at the top of their pyramid.

Race mixing has never eliminated racism — race mixed people just end up arguing over who is the whitest, as they do in India.

Evolution, sociology, and global warming are all fake “sciences” heavily promoted by Jewish ‘experts’ to bamboozle the unwashed masses that race mixing will result in a super race of coffee-colored clowns ruled over by Jews.

This all raises the question: race mixing was strictly prohibited by the ancient Israelites, so why are today’s Jews — who claim to be their only living descendants — promoting something that is considered a sin in the Old and New Testaments?