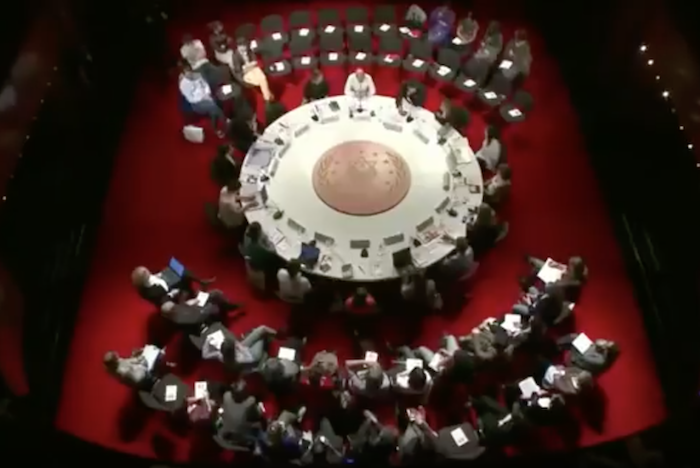 Marc Siegel, a Jewish-American professor of “Theater and Queer Theory” at Goethe University in Frankfurt, Germany has created a “performance piece” in which a ruling (jewish) elite discusses how to subvert Poland and turn it into a jewish multi-racial paradise:

In the video, Marc Siegel leads a discussion between international Jews from Germany, Poland, and Israel about how to subvert Poland’s Nationalists and the Catholic Church, and also make Hebrew and Vietnamese the official 2nd languages in Poland.

The proposals for the destruction of Poland includes the following:

Jews have long considered Poland to be theirs — at one time it had the largest population of Jews in the world, and they dubbed it the “jewish promised land” where they had their own separate legal system and acted independently from the Polish ruling elite.

That Jews like Siegel still fantasize about reconquering Poland should come as no surprise, especially considering how White and Christian it has become since the end of WWII when Poland was emptied of Jews, who fled to Russia and Israel.

While this piece has the deniability of being a “performance art project,” there should be no doubt in anyone’s mind that this type of jewish sanhedrin has convened in the EU and Israel to discuss how to effectively respond to the current pro-Polish, pro-Christian control of Poland.

Anyone who believes that the Jews are just going to stand by and allow the Poles to determine their own destiny is hopelessly naive.