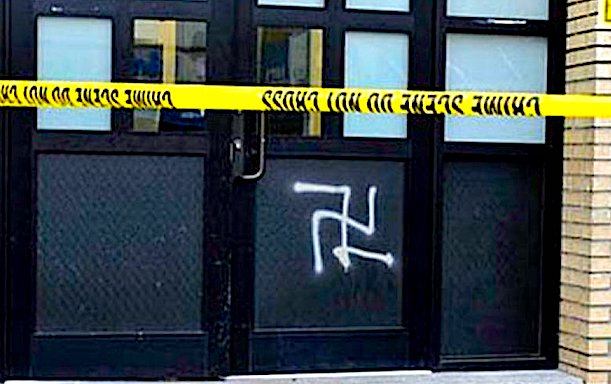 David Suissa, the editor-in-chief and publisher of Tribe Media Corp and Jewish Journal, admitted in his recent essay, “Fighting Antisemitism Without Fear,” that Jews not only profit from antisemitism, it’s literally ‘money in the bank‘:

Let me make a professional confession — in the Jewish world, anti-Semitism is like money in the bank. Whether we like to admit it or not, when we make a big deal of Jew-hatred, it boosts readership and fundraising. That’s because fear sells, and the haters know it. They expect us to advertise our fear, and every time we do, they win.

But there’s a silver lining we rarely hear about. A key reason people hate Jews is because we’re seen as being successful. Said another way, the silver lining to anti-Semitism is that it is a measure of Jewish success, a sign of our strength, especially here in America.

In a 2018 essay in The New York Times, social psychologist Amy Cuddy explained this phenomenon.

“In our research,” she wrote, “a widespread stereotype of Jewish people … falls in the competent-but-cold quadrant. Groups in this quadrant elicit respect but also resentment for their success. We call this ‘envious prejudice.’”

I know it’s not polite to talk about “Jewish success.” As Jews, we’ve learned through our long history of persecution that it’s much safer to just keep quiet about things like “Jewish success” or, even more so, “Jewish power.”

As a result, we embrace any opportunity to tell the world: “See, things are not that good for us! We’re not that powerful!” Maybe we figure that if we’re quiet about our success and loud about our victimhood, we’ll gain some sympathy to balance the envy.

Well, maybe. But let’s not kid ourselves: We pay a price when our body language is more about fear than about strength.

For one thing, freaking out after each anti-Semitic incident only encourages the Jew-haters to do more of it, so they can feast on our fear.

But on a deeper level, when so much of the Jewish conversation revolves around fighting Jew-haters, we must ask: Is that the Jewish identity we want to pass on to the next generation? Do we want them to “light up” only when Jew-hatred shows its face?

By all means, let’s defend ourselves. Let’s work closely with law enforcement, let’s call out hateful rhetoric, and let’s use the courts to punish offenders.

But let’s not show fear. In the end, the smartest way to fight the haters is to show them that their hatred is a useless act that will neither frighten us nor make them famous.

Replacing alarmism with the language of strength and pride may not boost ratings or fundraising, but it’s good for the Jews and terrible for the haters.

Yes, the ADL and SPLC rake in ten of millions of dollars each year by screaming bloody murder even when a someone calls a random Jew a mean name.  They don’t miss any opportunity to present any Jew anywhere as a victim of ‘hate’ even before the police have had a chance to investigate.

And Suissa has typically no insight into why people so consistently resent abrasive jewish behavior.  All he’s got is the age-old, tired canard that the goyim are envious of jewish ‘success’.

But Jews themselves are an envious people, so it’s only natural to project their deep-seated insecurities on the goyim.  After all, it’s Jews who try to imitate us — our lifestyle, our clothing, our food, and even our noses.  They try to pass themselves off as White when it’s to their advantage.

What does Jacob Rothschild, the richest Jew in the world, do with his vast wealth?  He takes on all the trappings of the White English aristocracy.  He buys expensive art, rare books, and antiques created by White people.  Why?  Envy and covetousness.  What Jews themselves cannot truly be or create, they buy or steal outright.

But most importantly, Jews envy our bloodline.  Deep down inside they know we are the true Israelites, and they are Khazar converts who can only play act the part.

They stole our identity out of envy, pure and simple.

And whenever their deception is exposed, they cry “Antisemitism!”