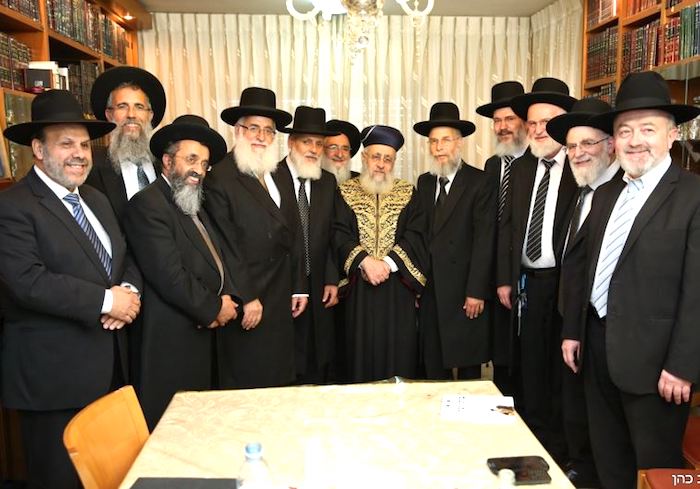 Last month, without giving an explanation for its decision, the Jerusalem Rabbinical Court awarded a father custody of his children in a divorce case, including a daughter whom police strongly suspect he raped:

The decision goes against the advice of police and social workers, who have recommended the children be placed with their mother, the Ynet news site reported.

Attorney Batya Kahane-Dror, who is representing the mother, said the District Rabbinical Court in Jerusalem gave no reason for the ruling, which it handed out without a prior hearing or a statement from the mother, the Haaretz daily reported Tuesday.

The children are caught in a custody battle between the father and his estranged wife, who, due to medical issues, has difficulty caring for the children.

In the decision, the judges said the father’s custody was temporary, until the mother “fully cooperates” with the court and a psychologist it appointed who is being paid by the father.

The father was arrested last year after video emerged of him apparently abusing his daughter. He has denied the abuse and claimed he filmed his daughter reenacting a sexual assault by a different family member in order to file a complaint to authorities.

He presented the footage to welfare services of his own accord, which is how the video came to light. Police were unconvinced by his explanation and are seeking charges of an indecent act on a minor and rape of a minor within the family.

None of the names or identifying details of those involved were provided in the reports due to the nature of the case.

According to the Ynet report, the father had initially been granted the right to take care of the children. Following his arrest, the rabbinic court ruled that the mother should be put in charge while granting the father visiting rights under the supervision of welfare services.

Over time, the psychologist changed his opinion from recommending joint custody to giving the father full control over the children, based on an external opinion that estimated the father presented a low threat to the children.

The rabbinic judges adopted the psychologist’s opinion and last month ruled that the father should get custody.

“This is a complicated case about which hearings were held and detailed decisions made, which cannot be elaborated on due to the nature of the details,” the rabbinical courts administration said in regard to the ruling.

The rabbinic court follows the Talmud, and since the Talmud doesn’t necessarily frown upon pedophilia, it’s not surprising that the court ultimately ruled in favor of the father-rapist.  And, of course, rabbis will always tell you how “complicated” these cases are just in case you feel that their findings are “problematic”.  In his book “On The Jews and Their Lies,” Martin Luther described this kind of jewish thinking as “Talmudic hairsplitting,” but he was an antisemite, so his opinion doesn’t count.

And it’s hard not to notice that this case didn’t elicit outrage from the jewish feminists who usually go apoplectic when a White man even looks at a woman the wrong way or uses the wrong pronoun.  Instead we hear no feminist concern that this little jewish girl who has been raped by her father is now forced back into his custody to probably be abused all over again.  But Jews are double-minded and completely comfortable being hypocrites — it’s far more important to make sure the goyim don’t step out of line than their fellow Jews.