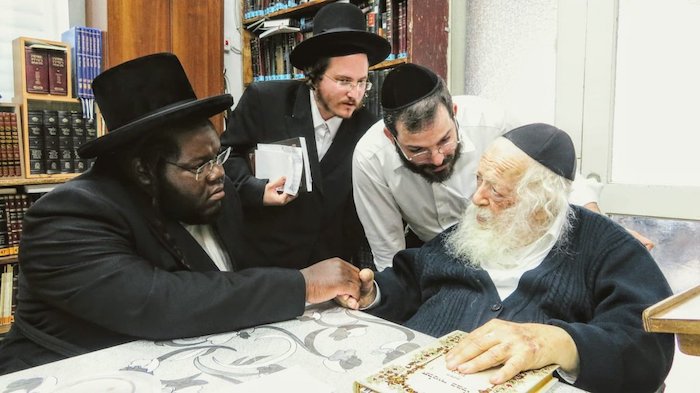 The Black Hasidic rapper, Nissim Black, cannot find any jewish schools that will accept his children — and he has been told explicitly by a rabbi that it is because of the color of their skin:

In an interview with Menachem Toker on Radio Kol Chai, Black explained the cause of his visit is because his children have not yet been accepted to schools due to the dark color of his skin.

“It was an amazing opportunity,” says the rapper. “I went to Rav Chaim and asked him for advice on what to do, they do not accept us to school because of the color of my children, they tell me that explicitly.”

Black declined to elaborate on the full conversation, and only said Rav Chaim’s eyes said everything, and that the first sentence Rav Chaim told him is “being ‘Black’ is your Mayla (Virtue) not a Chesaron (Lacking)”- “להיות כהה עור זה יתרון ומעלה, ולא חיסרון”.

Black added that “for a second it felt like the whole world stood still”.

“People know me as a rapper, but I’m on the road all the time for Klal Yisrael,” said Black. “I heard from many people before that it would be a problem because I was dark, but I responded that I was strengthening people precisely because of my skin color.”

Black said his children do not know that their skin color is the reason why they have not yet started school.

“My children were at home and not at school because there was no school that received them … We tried to get our 10-year-old into a school that fits our Hashkafa and they rejected us because of our skin color. They can ask my Rav about me, or even say it’s because of my profession. But to reject us for our skin color, is unacceptable.”

“God forbid, the children will know,” adds the rapper. “We do not tell our children and in the meantime they think we are still looking for the best school for them.”

It’s hard not to notice how timid this Black rapper is around these Jews who have rejected his children simply because they are Black.  If these were White Christians who rejected his children from attending their schools, he would be threatening lawsuits and the jewish media would be giving his story front page coverage.  Why is this rapper so deferential toward these Jews?

Hasidic Jews may give lip service to accepting Blacks into their “faith”, but nothing could be further from the truth — they see Blacks as animals or “shwartzers” which is the jewish “n-word”.

The only acceptable “converts” to Judaism are Jews themselves. Non-racial Jews can go through the motions, but they really won’t be accepted, and no one is going to call them out on this issue.

Jews permit themselves to be racially exclusive — to practice a Jim Crow religion — and no Black is going to tell them otherwise.