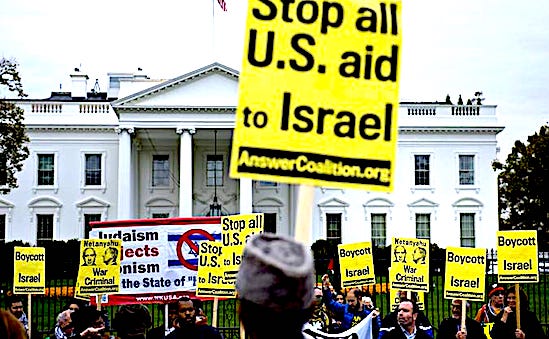 The Democrat jewish senator from Maryland, Benjamin Cardin, has introduced Senate Resolution 720 – known as the Israel Anti-Boycott Act. It was co-sponsored by the jewish senator from New York, Chuck Schumer, with a similar version making its way through the House.

This legislation is in direct conflict with the 1st Amendment right to freedom of speech and targets those who are critical of Israel with draconian prison sentences and fines:

American citizens are set to be fined up to $1 million or imprisoned for up to 20 years for criticizing Israel or supporting the BDS boycott, thanks to new legislation sponsored by Senate Democratic leader Chuck Schumer.

Anyone guilty of violating the new prohibitions will face a minimum civil penalty of $250,000 and a maximum criminal penalty of $1 million and 20 years in prison under the new law.

According to the ACLU, the Cardin legislation would “bar U.S. persons from supporting boycotts against Israel, including its settlements in the Palestinian Occupied Territories conducted by international governmental organizations, such as the United Nations and the European Union. It would also… include penalties for simply requesting information about such boycotts. Violations would be subject to a minimum civil penalty of $250,000 and a maximum criminal penalty of $1 million and 20 years in prison….This bill would impose civil and criminal punishment on individuals solely because of their political beliefs about Israel and its policies.

Although this bill was first introduced in 2017, it continues to gain traction with more co-sponsors recently signing on.

One of the first new laws created by the jewish Bolsheviks when they took over Russia was to make “antisemitism” punishable by jail or death. Despite its freedoms, the United States is now following in Russia’s footsteps, with jews like Chuck Schumer and Ben Cardin leading the charge.

One hundred years later, we find ourselves in a very similar situation – proposed Federal laws protecting jews from criticism. Only criminals and liars are afraid of being criticized.

What other ethnic group is powerful enough to demand such draconian laws to protect them from criticism?