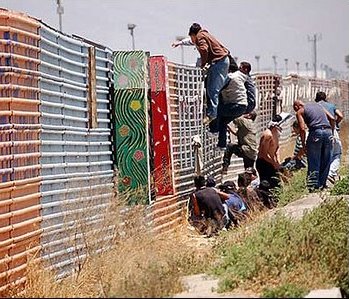 Behind the scenes on Capitol Hill, jewish lawmakers and pro-Israel partisans are attempting to make funding for President Trump’s border Wall contingent upon passing legislation that would make boycotting Israel illegal in the US:

Sens. Ben Cardin, Democrat of Maryland and Rob Portman, Republican of Ohio have been leading the charge on behalf of a Senate bill that would punish those who participate in or facilitate the anti-Israel boycott. The sponsors hope to get the bill through in the final weeks of this Congress.

Two Jewish senators who caucus with Democrats — Bernie Sanders, Independent of Vermont, and Dianne Feinstein of California — have asked the chamber’s leaders, the majority’s Mitch McConnell of Kentucky and the minority’s Chuck Schumer of New York, to end their bid. (For those who count, Feinstein, Sanders, Cardin, and Schumer — who backs the bill — are Jewish.)

So what’s in Israel Anti-Boycott Act and where does it stand? This is complicated and, as is typical with Congress, includes factors that ostensibly have nothing to do with Israel — chief among them, President Donald Trump’s $5 billion wall with Mexico.

Cardin has gone some way to addressing complaints from Democrats that the bill infringes on free speech — but not enough for Sanders and Feinstein. In their letter this week to Schumer and McConnell, they wrote that “while we do not support the Boycott, Divestment and Sanctions (BDS) movement, we remain resolved to our constitutional oath to defend the right of every American to express their views peacefully without fear of or actual punishment by the government.”

Critics of the anti-boycott bills, like the American Civil Liberties union, say they punish the right to free speech, and ask what a person’s personal beliefs have to do with the job they perform as a state or commercial contractor. The latest version of the Senate version of the bill explicitly exempts non-commercial boycotts from punishment. So Joe Boycotter, caterer, can boycott Sabra hummus all he wants at home, but if he refuses a request to provide Sabra at the save-the-whales fundraiser, he could be in trouble. (This distinction is exactly what’s playing out in Texas, where a speech pathologist says her free speech rights are impinged by a state version of the bill. On the other side are those who say she can say and do what she wants at home, but can’t act on her pro-boycott feelings on the job.)

…Portman and Cardin hoped to have the bill attached as an amendment to must-pass spending bills (lots of folks are describing this as “sneaky,” but it’s commonplace in a Congress’ last weeks). A staffer for a senator backing the bill told me that was unlikely if Congress passes a stop-gap “continuing resolution,” but more likely if Congress manages to pass an omnibus, multifaceted spending bill.

Yes, what the Jews are doing here is ‘sneaky’, but that’s how Jews do pretty much everything.  They are never upfront about what they really want; instead, they get what they want often through the backdoor because no one would accept what they are really after.  It would seem that the Jews are not opposing the building of the Wall on “ethical” principals — they have no ethics or morals — rather they are blocking the Wall in hopes of getting something that would otherwise never pass through Congress — the anti-Israel boycott legislation.

Jews want to be able to punish anyone who doesn’t want to do business with Israel with fines and even imprisonment.  They always deny that anyone will actually be jailed, but that’s their ultimate goal.  Not only that, once they get this legislation passed, they will have an essential legal precedent to go for further laws that will make even criticizing Israel illegal as a form of “hate speech” which will also be punishable by fines and imprisonment.

If you want to know who rules over you, just find out whom you are not allowed to criticize.