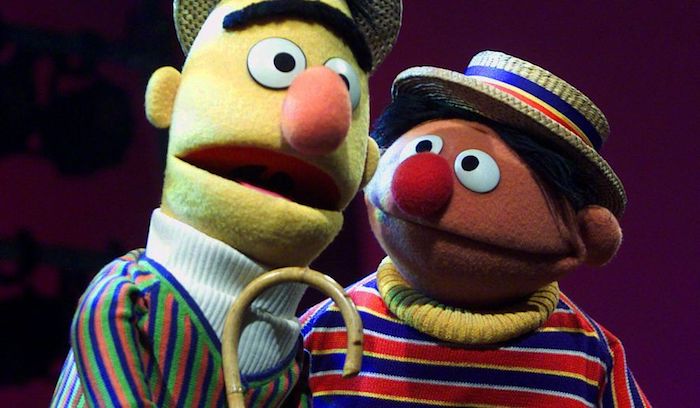 [Note: The original article from The Washington Times has been scrubbed from the internet — however, the article still appears on its original site here.]

(The Washington Times) Mark Salzman — who worked as a writer on Sesame Street in the 1980s — claims that the characters Bert and Ernie were actually gay lovers:

Mark Saltzman, a former longtime script writer for “Sesame Street,” has confirmed the longstanding rumor that Bert and Ernie are a gay couple.

Mr. Saltzman, who came out as gay while writing for “Sesame Street” in the 1980s, told LGBTQ lifestyle website Queerty in an interview this week that he mirrored Bert and Ernie’s “loving” relationship after his own relationship with film editor Arnold Glassman.

“I always felt that without a huge agenda, when I was writing Bert and Ernie, they were [gay],” he said. “I didn’t have any other way to contextualize them. The other thing was, more than one person referred to Arnie & I as ‘Bert and Ernie.’”

Mr. Saltzman, who worked for 15 years on “The Muppets” and wrote scripts and songs for “Sesame Street,” said he was the Ernie in his relationship.

“And Arnie as a film editor — if you thought of Bert with a job in the world, wouldn’t that be perfect?” he asked. “Bert with his paper clips and organization? And I was the jokester. So it was the Bert and Ernie relationship, and I was already with Arnie when I came to ‘Sesame Street.’ So I don’t think I’d know how else to write them, but as a loving couple. I wrote sketches … Arnie’s OCD would create friction with how chaotic I was. And that’s the Bert and Ernie dynamic.”

Despite Mr. Saltzman confirming he wrote scripts basing Bert and Ernie on his own same-sex relationship, Sesame Workshop tweeted a statement Tuesday afternoon saying the characters have no sexual orientation.

In the past, certain countries had passed laws that strictly prohibited Jews from working around Christian children, and Mr. Saltzman is a perfect illustration of why this was — and continues to be — necessary for the health of our families and society.

No doubt, Mr. Saltzman thinks it’s funny that he was entrusted to work on a children’s show that he secretly tried to subvert and use as a vehicle to promote his psycho-perversions.

And of course, Jews are proud that Saltzman is a sodomite who worked on a successful children’s television show.

One of their own had a part in creating one of America’s most beloved shows, and the fact that he’s a pervert is just icing on the cake.

If sodomites work on your favorite kids shows, then you can definitely trust them around your children — even as babysitters and Boy Scout leaders.